Timber lattice supporting framework is one of a kind

The new Swatch headquarters, which has now opened its doors in Biel, Switzerland, promises to become a landmark with extraordinary promotional reach. The sensational design by Japanese architect Shigeru Ban connects the buildings of the Omega and Swatch brands not only through the Cité du Temps building, but also via a spectacular Free Form supporting structure comprising a gigantic timber lattice shell. The 240 metre long, curved timber structure is already the fourth project delivered by Swiss timber construction specialist Blumer-Lehmann AG in collaboration with the world-famous architect.

Swatch Group had long been planning a new head office for Swatch Ltd, an Omega production building as well as the Cité du Temps museum building in Biel in western Switzerland. The architectural competition launched for the project in 2010 was won by Japanese architect Shigeru Ban. With his design, Shigeru Ban achieved the creative balancing act of giving Omega and Swatch, two very different brands, their own architectural identity with his new buildings, while also integrating the heritage-protected industrial buildings from the early days of industrialisation.

Corporate culture translated into wood
Shigeru Ban designed the three buildings with different timber construction techniques. Given the client’s objectives for environmental sustainability, and inspired by Biel’s renowned university of applied sciences for architecture and timber construction (Fachhochschule für Architektur und Holzbau), the ‘world’s only renewable construction material’ was a logical choice for the architect. He wanted his timber structures to give the city new landmarks and to express the different concepts of both brands in their designs. The extraordinary new Swatch building, which is located next to the first Swatch-Drive-Thru, houses the entire Swatch Ltd. administration and the warehouse.

The impressive, organic contours of the building wind along the river, through the landscape, extending over the new Nicolas G. Hayek-Strasse before finally docking at the roof of the new Cité du Temps building. The elongated building is covered with a giant timber lattice supporting structure of vast proportions with a length of 240 m, a maximum span width of 35 m and a height of 27 m. The supporting structure is covered with a variform shell comprising different façade elements. These include enclosed and insulated elements, transparent glass elements, solar shading elements with solar protection glazing, photovoltaic elements, elements with air cushions made of ETFE foil and optically and/or acoustically effective inlets in the form of Swiss crosses as well as a number of large balcony openings in the facade.

Parametric planning for precise production
For the timber construction specialists at Blumer Lehmann, the construction with an area of 11,000 m2 is the largest lattice shell produced in the company’s history. ‘The design and the individual beams are enormous and precision requirements were very high. Yet all of that can be achieved with timber construction,’ says Felix Holenstein, Blumer Lehmann project manager for the Swatch project. ‘One challenge, however, led to the decision to lay the building technology pipe and cable runs in the supporting structure.’

The design was previously tested for feasibility during a three-year planning phase and the geometry of the beams was defined. None of the 4,600 beam elements of the lattice supporting structure is like the others. Each one is unique. There is no repetition. Together with timber construction engineers from SJB Kempter Fitze AG and other specialist engineers, as well as the architects, we determined the principles which could be used as the basis for a detailed co-ordination model. ‘In this project, that was part of the planning even before the tender and award took place, in order to create a very high degree of detail for those working on the construction to build upon,’ explains Fabian Scheurer from Design-to-Production, who were involved as digital consultants as early as the planning phase. ‘Our task was to translate freehand sketches and plans into a 3D model with 2,800 façade elements which could be used to test and adjust concepts.’

When the decision was taken in 2015, following the award of the tender, to integrate the building technology and all pipes and cables for the electrics, air conditioning and sprinkler system into the supporting structure, the details had to be revised yet again. This meant additional rounds of co-ordination with the timber construction engineers and specialist planners to calibrate and test all openings down to the last drill hole. Blumer Lehmann’s key partners in these aspects of planning were engineers SJB Kempter Fitze and the planners from Design-to-Production. Both firms have collaborated with Blumer Lehmann for many years, cultivating an open and solution-focused partnership that had a positive impact on the planning process.

Once the detailing was complete, the 2D plans could be parameterised for 3D modelling. Based upon this 3D model, three different types of blank were then defined in laminated timber: ‘straight’, ‘single-curved’ and ‘double-curved’ beams. Like the straight beams, the single-curved beams are also suitable for slightly curved and slightly twisted structural elements. However, the design of the building dictated that most beams used were double-curved beams, which were made from raw material, curved and twisted in two directions and glued as laminated timber. The parameterisation allowed more than 16,000 steel components and 140,000 connectors to be reduced to just a few types.

Elaborate assembly at a height of 16 metres
To meet the assembly deadline, the beam elements were produced in five different Blumer Lehmann production facilities. Some of these facilities operated in four shifts. Which components were to be produced at which facility had to be determined at an early stage in order ensure the availability of the right raw material and appropriate production data for the relevant machines. The different radii of curvature of the blanks up to 13 m in length made these difficult to store. This meant that storage also had to be planned and prepared with great precision. The whole supporting structure for Swatch required 6,500 Swiss spruces and a total of more around 2,000 m³ of wood was processed.

Planning the assembly posed another challenge. Once it was decided that the interlocking components could be assembled end-to-end, the assembly sequence was determined. This also affected the production of the beam elements since these had to be produced precisely in this sequence and delivered to the construction site. ‘The greatest challenge was to have the right components on the construction site at the right time,’ recalls Felix Holenstein. ‘This would not have been possible without three-dimensional planning using a 3D model.’

Before the components could be assembled on the construction site, Blumer Lehmann erected empty scaffolding and defined the support points precisely. The measurement data for this was taken from the 3D model. The auxiliary structure was used to support the main construction until completion and subsequently allowed follow-up works, installations and facade works to be performed. The road in front of the central building also had to remain accessible to traffic throughout the nine-month assembly phase. An additional platform almost 13 m high was therefore installed as an assembly bench for the assembly team to work from. The lattice shell itself was built in 13 successive stages. Once the ground elements were anchored in place, it was possible for team members to work from the bottom up so as to meet in the middle at the ridge line. ‘It was important to take continuous measurements with the tachymeter in order to counteract any accumulation of deviations,’ recalls Stefan Bischoff, installation manager for Blumer Lehmann. Although everything was planned and calculated meticulously in advance, tension was still riding high, particularly during the initial stages – until the two flanks eventually met to the exact millimetre. 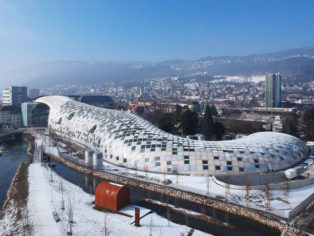