Thornton Tomasetti, the international engineering firm, announces the topping out of Shanghai Tower, the 2,073-foot-tall, 4,090,285 square-foot, mixed-use tower currently under construction in Shanghai, China, for which the firm provided structural services. Shanghai Tower was designed by Gensler, the global design and architecture firm and developed by Shanghai Tower Construction & Development Co. Construction began on the tower in 2008, and is slated for completion in 2014.

The tower will have Class A office space, retail, a luxury hotel, and cultural venues. The world’s highest observation deck will sit atop the uppermost floors.

The exterior of the tower drapes around an inner concrete structure, comprising nine cylinders stacked atop each other. The super-columns with outriggers support the twisting-form curtain wall, offering an effective system for resisting wind and seismic loads for super tall buildings. 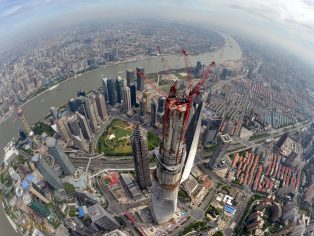