Located on Paradise Street and managed by student accommodation provider, AXO Student Living, the development includes studio rooms and study bedrooms, arranged in clusters, as well as a cafe bar, cinema and gym.

Designed by Fraser Brown Mackenna Architects and constructed by Galliford Try, the new building incorporates three towers with 10, 12 and 14 storeys respectively, together with an extensive three storey town house structure that is arranged in a ‘wall’ below the towers and adjacent to the city’s ring road.

To meet fire safety and smoke ventilation requirements, the buildings are separated into six individual fire zones with dedicated smoke control solutions from SE Controls serving each zone, which protects stairwells and corridors by keeping escape routes clear of smoke if a fire should occur.

The town house is separated into three zones with the ‘cluster corridor’ in each being protected by a mechanical smoke ventilation system, using duty and stand-by SHEVTEC® fans, with replacement air supplied by automatic opening lobby dampers connected to a natural air inlet shaft.

In addition, two of the town house zones also have a stair lobby, each of which is protected by an automatic louvre vent at the head of the stairs. Once triggered by a fire alarm signal, the corridor dampers on the fire floor open, together with the stair louvre, allowing smoke to be extracted from the building. Also, Manual Control Points (MCP) are located throughout the town house zones, which enable the system to be managed and reset by fire service personnel.

The three high-rise blocks also use SE Controls mechanical smoke extraction, but in a duplex push-pull system that enables smoke to be removed from corridors through one of two smoke shafts, depending on the location of the fire, to keep escape routes clear.

Each of the main stair cores in the tower blocks are also protected with roof mounted automatic louvre vents, which allow smoke and heat to be vented, keeping them clear of smoke and hot gases to aid escape.

The system is designed so that every tower incorporates two smoke shafts, each of which is connected to a duty and stand-by SHEVTEC smoke extraction fan set capable of running in either direction. In the event of a fire, both duty fans will start with one shaft extracting the smoke, while the other fan runs in the opposite direction, which helps purge smoke by pressurising the other shaft and corridor.

A key advantage of this approach is that the direction of operation is dependent on the location of the fire so that the extract fan shaft is always closest to the source of a fire and the pressurised replacement air is supplied by the farthest shaft for more rapid and effective smoke removal.

Each corridor incorporates a SHEVTEC lobby damper at each end as well as an automatic smoke door by the lift lobby, which open when a signal is received from the building’s alarm system.

The control of the complete smoke ventilation and extraction system is handled by 12 SE Controls OS2 SHEVTEC controllers with integral failsafe battery backup, which are linked to a series of OSLoop Coordinators throughout each of the six fire zones. OS2 MCPs and tamperproof MCPs are also installed to allow the fire service to manage the system’s operation and reset it after any fire event.

“This is an ideal example of how we combine our technical expertise, immense experience and innovative products to develop a highly effective solution for this flagship residential project.”

“The Paradise Student Village is an innovative development itself and is providing much needed high quality accommodation for students attending the city’s university and I’m delighted that we have been able to play a key role in their safety.” 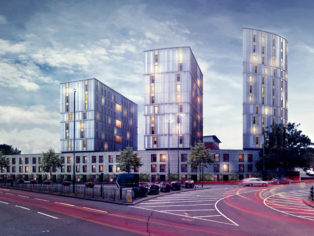