Thomas Heatherwick and SelgasCano are amongst those leading the programme for the final week of the festival. The London Festival of Architecture (LFA) exists to engage the public with those responsible for developing and growing our city. In the final week of the festival, leading cultural institutions and festival partners, such as the Serpentine Gallery, the Victoria & Albert Museum and the Royal Academy of Arts, will deliver an exciting array of cultural events to engage members of the public from all walks of life in the festival’s activities. RIBA London’s keynote debate, The Changing Face of Workspace (22 June), will feature an expert panel discussing the origins of our working environments, how and why they are changing and how this affects the individual.

Returning for its 15th edition, the Serpentine Pavilion is always a cultural highlight on the festival calendar. On 23 June, José Selgas and Lucía Cano, will join Serpentine Directors, Julia Peyton-Jones and Hans Ulrich Obrist, to discuss their futuristic design for the 2015 pavilion, in Park Nights 2015 Prelude: SelgasCano in Conversation.

Later in the week, The NLA Annual Lecture will present Thomas Heatherwick (29 June), who will discuss his work and influence on public spaces, using his proposal for London’s Garden Bridge as an example. Also returning for a second year after phenomenal success at last year’s festival is the RA LEGO Architecture Challenge (28 June). This fun and engaging afternoon will see four leading architecture practices – Wilkinson Eyre, Farrells, Studio Weave and Ordinary Architecture – battle it out to create the greatest work that they can from LEGO. Each team received a brief to create a proposal for a ‘creative city’, and to explore the best recipe for different types of buildings, infrastructure and public spaces that make a creative city.

Also open to all, and another hugely popular returning event, is Friday Late: Instrumental Social Art (26 June) at the Victoria & Albert Museum. It will ask attendees to explore public, cultural and economic life through active participation, and will prompt debate surrounding art, design and architecture’s relevance today as a tool for social development. Also addressing the future of the arts in the public realm is the Barbican, in its talk, Come Together: Reinventing the Arts Centre (29 June), in collaboration with The Architecture Foundation. Taking plans to refurbish the Hayward Gallery at the Southbank Centre, as well as Olympicopolis, as examples, the talk will offer the public the platform to interrogate the goals and methods underpinning this dramatic expansion of London’s art infrastructure.

A number of events in this final week will also provide unique access for the public to see first-hand how certain areas of the city are developing. The London Legacy Development Corporation (LLDC) will host Legacy in Progress (25 June), three simultaneous tours and talks about the development and construction of interim use spaces, Hub 68, The White Building and The Yardhouse. Similarly, the Greater London Authority will lead GLA Guided Walks: Park Royal & Old Oak (22 June), to uncover the industrial activities of Park Royal, and how it will benefit from the UK’s largest regeneration project in neighbouring Old Oak Common. Lastly, Berkeley Group will be leading two site tours, On Site at Goodman’s Fields (26 June) and On Site at Abell & Cleland (29 June). Both tours will allow the public to visit these developments and hear from the teams involved.

The Whole-Life Workplace
23 June, Hawkins\Brown
Co-working spaces have fundamentally shifted the idea of the workplace. A breed of freewheeling young creatives has largely fueled their success. But are the limits of co-working defined by age? Whether you’re an educator, developer or care-worker, please join us for a drink and an all-ages discussion.

One to Watch Pecha Kucha
25 June, Design Council
As part of their 70th anniversary celebrations, Design Council has selected 70 Ones to Watch – a group of rising stars that represent the future of British design. This PechaKucha session will showcase some bold ideas from exciting, early career designers with an eye on the future, as well as providing an insight into how and where they work.

Routemaster Tour of the West End
22 June, Peter Murray
Following the huge success of last year’s ride, Transport for London Commissioner, Sir Peter Hendy will once again be driving his restored Routemaster bus round the West End with a top team of tour guides from London’s leading developers as part of the London Festival of Architecture 2015.

Friday Late: Instrumental Social Art
26 June, Victoria & Albert Museum
Art and design can hold the capacity to empower and transform. Join us as we explore public, cultural and economic life through active participation and ask questions of art, design and architecture’s relevance today as a tool for social development/to activate social structures.

Office Space by Mike Judge Introduced by Will Wiles
30 June, White-Collar Tale Film Nights with RIBA London & Disegno Magazine
White-collar Tales is the third series of Film Nights hosted by RIBA London and Disegno magazine. This screening is centred on Mike Judge’s Office Space, a 1999 comedy. The film is based around employee dissatisfaction in a mid-to-late-1990s software company, with much of the action satirising the dominance of the cubicle-based workspaces common at the time.

International Focus Country: Ireland
We Built This City
30 June, Irish Architecture Foundation in Collaboration with Irish Design
We Built This City, an Irish Architecture Foundation initiative delivered for Irish Design 2015 (ID2015), tells the story of how cities are created. It highlights the contribution the Irish have made to the built environment of three global cities: London, Chicago and New York, focusing on Irish construction and design industries both historically and present day. 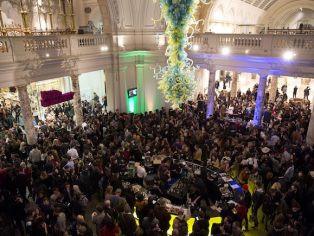