The 2017 Stephen Lawrence Prize, now in its twentieth year, has been awarded to The Houseboat, designed in collaboration with Meredith Bowles of Mole Architects and executive architect Rebecca Granger.

Built for clients who are architects themselves, this extraordinary house is the culmination of many years of designing and collaborating. The result is a spectacular home, conceived as two upturned hulls propped together, with breath-taking spaces facing the sea over Poole Harbour.

The Stephen Lawrence Prize was first awarded in 1998 in memory of Stephen Lawrence, who was taking steps to become an architect before his untimely death in 1993. Since its inaugural year, the Prize has been supported by the Marco Goldschmied Foundation and aims to encourage new, experimental architectural talent, celebrating and rewarding projects with a construction budget of less than £1 million.

“In an age where detail design and carefully crafted construction are all too often sacrificed to meet short term deadlines, the Houseboat is a welcome exception. Its split-level geometry and use of disparate materials and ad-hoc elements have been seamlessly assembled into a surprisingly harmonious and entertaining whole. A new house that feels like a lived-in home from the outset is a rare achievement. Congratulations to the architects and clients for their patient dedication in bringing it to fruition.”

“The Houseboat is a great expression of context inspired concepts, experimentation and finely tuned craftsmanship.

“The seaside retreat sits comfortably next to the owner’s other residence, known as The Boat House. This is a 1930’s modernist design, uniquely fitted out internally with second hand salvaged ship lounge joinery; and the skill of the architects behind The Houseboat lies in their refusal to challenge the existing building, but to reinterpret it by inverting the ‘Boat House’ into a ‘Houseboat’.

“Its concept, inspired by its coastal context, flows seamlessly from aesthetics to experience. The prominent black stained timber larch exterior – built on a concrete base – clearly exemplifies two overturned hulls and echoes the sea to the front. This aesthetic subtly continues into the space of the master bedroom where the intersecting planar curves surprise and enhance the user experience by indirectly appearing to be within a hull below deck. This element is further emphasised as one ascends through the house to the point at which the curves meet a dramatic pinnacle, forming an intimate yet open living space.

“Meticulous detailing and crafting permeates both internally and externally, from the grooves of the MDF wall lining, to the bespoke copper glazing on the rear façade which seeks to record the effects of weathering.

“One of the client’s requirements was for split levels connecting living, eating and working spaces under one large roof profile, an environment suited to a holiday home. The single roof is lifted with the concrete inverted keel and a single volume space is achieved. The split levels are connected by three stairs of concrete, wood and steel finishes, which give each space a personal quality.

“Multiple ideas are developed, distilled and precisely integrated throughout the house; ideas that have clearly developed through the successful relationship between the architect and client.

Ultimately, the true joy of this house is one that can only be experienced. An appreciation is only achieved once fully immersed within the space.” 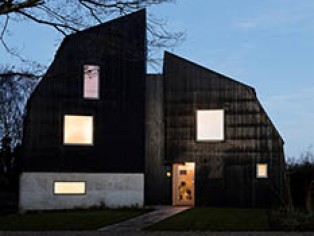