The house that isn’t there – Hidden House, Knightsbridge, London

A private family home in Knightsbridge is virtually invisible from the street, concealed below ground and providing a precision-engineered result. Stephen Cousins reports.

If such a thing as “stealth architecture” exists, then the Hidden House, a three-bed family home located in the wealthy Royal Borough of Kensington & Chelsea in London, is one of the most covert examples around.

When seen from the street, the property’s single-storey white painted facade, sandwiched between two brick-built Georgian terraced houses, looks no different today from how it did five years ago, before the extensive renovation project began.

But the facade now conceals a sleek and precision-engineered new home, featuring 200 m² of internal space spread across three floors, including an expansive new basement level, open plan living areas and even a small garden. The project’s designer, London-based LTS Architects, had to tackle various planning and site constraints to deliver the property on the land-locked and overlooked site.

“There were a ton of constraints,” explains Greg Shannon, co-founder and director of LTS Architects. “Initially, we thought, there’s not much space, is there? But when we looked closer at the site we saw that it would enable us to produce a form of introverted architecture, more about moving light around inside the property than creating views out.”

The Hidden House is the reworking of a former shop and two former workshop buildings located behind it – a 1980s block used as a children’s furniture showroom, and a paid storage space.

The private client, based in Bath, owns the building next door, and wanted a London base for sporadic use by different members of his family, who have business engagements in the capital.

The original plan was for an above-ground development, but this had to be rethought after the planners demanded the retention of the existing gap in the street frontage. Any redesign would therefore have to work within the existing silhouette.

The prospect of a basement redevelopment was daunting – excavations on the same street had been refused in planning – but the fact the excavation would expand on an existing basement satisfied the Local Authority and the project was given the go-ahead.

“That was five years ago and the same decision might not happen today, London borough councils have really clamped down on basement excavations, which can be messy, noisy and intrusive.”

The existing brick buildings were in a poor state of repair so the decision was made to demolish the interiors and excavate the site back to its footings, while preserving the exterior shell and party walls.

The roughly L-shaped plan defines two intersecting perpendicular volumes. The main living areas, on the ground floor, are arranged as a sequence of linked open-plan spaces. The front door opens directly onto a large lobby with an atrium/staircase at one end, designed to pull light from an overhead skylight into the basement, and a kitchen at the other. The ground floor living room, to the rear of the property, has a glass floor on one side and provides access to a second stairway down to a small sunken courtyard.

The lobby staircase ascends to an upper level mezzanine, nestled below a trussed roof that extends out towards the rear of the property. The basement level houses two double bedrooms and a large master suite with an en-suite bathroom, located under the arched pavement vaults.

The crisp, minimal aesthetic and limited palette of materials, including timber, brick and concrete, is intended to create a calm, contemplative environment. The design might seem at odds with the sensibilities of the client, who runs a country manor hotel business and was keen for a property with a ‘rustic’ environment.

However, the challenging parameters of the inner city context made that ideal impossible – for example there could be no views out through windows – but a compromise was reached with the concept of an “urban barn”. The idea was to create two large perpendicular volumes, with gallery spaces, covered by a roof structure of deep timber trusses.

“We thought the owners would never go for the idea, but from a very early stage they bought into it and were genuinely intrigued about what was possible,” says Shannon. “After a few meetings with the client we realised there was going to be a lot of freedom on this project and when a client wants what you are doing, the collaboration suddenly becomes very interesting.”

The chunky laminated oak trusses are a key rural reference point. The timbers are deep enough to shield oblique views from the windows of neighbouring properties, and simultaneously allow diffused light to penetrate vertically into the property. The roof above the lobby incorporates a layer of glazing on one side of the pitch to bring light into the interior.

The timber has a personal connection to the owner as it was hand-crafted by Exeter-based Touch Design Group, a joinery business involved in delivering projects for his business.

“We went to meet the company and they were incredible, probably the best joiners I have come across in my 20-odd years as an architect,” says Shannon.

Every truss was hand-crafted from sheets of cross laminated marine ply, to very tight tolerances. Each had a bespoke carry box made, similar to a violin case, designed to protect it during transit from the West Country. The firm even invented unique carrying trolleys and hoists needed to lift the trusses into position from the excavated basement floor.

Despite its small size, the Hidden House was a BIM project, and in fact served as a test bed for LTS’ implementation of the technology. “Autodesk Revit was a new drafting tool that enabled us to detail components in a way we hadn’t been able to before. It is also a great presentation tool, many of the visualisations are a very close match to what we ended up delivering,” says Shannon.

Working in Revit enabled the team to gain a detailed understanding of the existing building’s geometry – many of the footings and the party walls are out of line  – and work to fine tolerances of +/- 0.5 mm, not normally associated with a domestic job.

The joiners didn’t work directly in the software, but exported the model to run CNC milling machines used to manufacture the trusses and staircases. In addition, BIM helped the designers achieve important precision connections between the frame-less glass floors and brick walls.

“It was crucial to make the connections look effortless, the tolerances we were working to were ridiculous,” says Shannon. “The house is almost like a 1:1 scale model, which is credit to the joiner and the contractor, Broseley. I have not been able to get the same level of quality and precision consistently across a project, before or since.”

But those beautiful lines and rich natural materials would be wasted if it wasn’t for clever tricks deployed to maximise the amount of light able to penetrate into the property.

The small garden and two atria provide a strong flow of daylight to the lower level, low-iron glass floors maximise the clarity of light, and all bedrooms have windows and access to daylight and ventilation, albeit not great views out.

The master bedroom is landlocked and has no window, but incorporates a sliding wall, which when fully open allows light to penetrate through the glass floor from the lobby above. The kitchen adjacent to the lobby even has a glass splashback to increase the amount of ‘borrowed light’ able to enter the bedroom below.

The sliding door also forms part of a strategy to de-compartmentalise spaces and open up the plan. In normal use, only one or two people will be inside the property at a time, which means the conventional privacy needs of a family disappear.

It’s another piece of the intricate jigsaw required to make this difficult site work to its full potential. For his part, Shannon remains modest:

“Every site in London is constrained, you’re always in someone’s pocket or backyard, you just have to be considered and aware of the circumstances before you start,” he concludes. 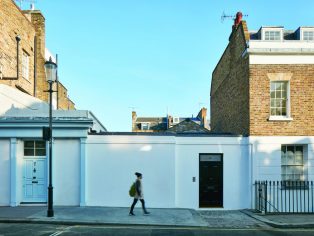 The white-painted facade has not changed in five years, but now conceals a sleek new home 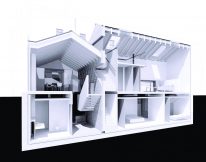 The crisp, minimal aesthetic and limited palette of materials, including timber, brick and concrete, is intended to create a calm, contemplative environment