The Anibal Building in Ipanema, Rio, is a low-rise office block that neatly reflects the Brazilian city’s flair for original and unusual building facades, as Ray Philpott discovers.

Architects Bernardes Arquitetura faced some complex challenges when they set out to design a  modern office block in the upmarket coastal neighbourhood of Ipanema in Rio de Janeiro.

Commissioned for the work by a private family firm, the team were tasked with creating a spacious contemporary, stylish and light-filled five-storey business hub called the Anibal Building.

The clients, who place a high value on privacy, wanted an outstanding building in terms of design and quality – without being overly flamboyant – to replace an unspectacular concrete and ceramic residential block.

The architects  faced the difficult task of designing a stylish, relatively narrow-fronted, five-storey building extending far back, with three solid walls and just one facade suitable for glazing.

This and the specific requirements for discretion and privacy, meant creating an envelope that would let in sufficient light without excessive solar gain wasn’t straightforward.

Bernardes Arquitetura was founded in 2012 by established and respected Brazilian architect Thiago Bernardes. With offices in Rio, Sao Paulo and Lisbon, it has a reputation for residential and commercial architecture and interior design of hotels, condominiums, leisure and entertainment establishments, as well as master and urban planning.

For Anibal the practice created a five-storey concrete-framed design set back from the street, with three particularly interesting elements in the envelope – the attractive triple-layered street facade, the inner ‘library’ facade of the rear wall, and the roof garden.

Concrete waffle-slab floors and ceilings are supported by columns on the outer edges of the structure that are infilled with non-structural concrete blocks to form the back and side walls sitting on the existing foundations.

On the ground floor a small exterior concourse of small-stoned ‘Portuguese paving’ leads to the unobtrusive entrance and reception and enclosed parking area. Above it are three levels of open-style offices and smaller meeting rooms. Within the envelope, the circulation areas, stairwells and lift, services, other meeting rooms, concrete stairs, kitchen, cloakrooms and bathroom facilities are situated on the left and right peripheries of the building. A private roof terrace for staff leisure time and informal meetings adds a neat touch to the block.

The side walls abut the neighbouring buildings on each side and are finished internally with sprayed, textured render and no additional insulation due to the warm Brazilian climate.

Project Architect Francisco Abreu explains the practice’s approach: “Planning regulations meant we could not go any higher than the previous building.

“Additionally, our clients, who were going to occupy part of the building themselves, clearly wanted an attractive, outstanding office building that is simultaneously fairly private and discrete.”

To meet these seemingly conflicting expectations and counter the visual impact of the higher surrounding buildings, the architects envisioned a structure with differing aesthetics to its neighbours.

“We sought to transmit a sense of quality and originality combined with an element of discretion,”  he says.  “However, the first practical issue we had to resolve was getting enough daylight in because even a fully glazed front facade would not let in enough light.”

The solution was the Anibal ‘library’, an eye-catching interior feature running vertically down the interior of the rear wall of building, lit directly from above via 10 m2 of coated, solar-controlling skylights on the roof.

Light cascades vertically down from the skylights through a series of 40mm-thick toughened glass ‘walkways’ and glass panels below, located at each level of the library, and illuminates the interior spaces. The open office areas and meeting rooms on each floor are divided by glass partitions, enabling good interior daylight penetration.

“The library forms what we call a ‘light prism’, distributing daylight while filtering out unwanted solar radiation,” explains Abreu. “The floor glazing is supported on a grid of metal beams firmly anchored into the columns in the wall structures and also columns supporting the slab floors.”

Additionally, the library transforms a potentially bland, functional supporting rear-wall into an attractive inward-facing facade comprising shelving and display systems containing books, magazines and other visible materials, while dark-grey aluminium sheet clads the spaces between. The outside of the wall is simply rendered and painted.

The major light source and the defining design feature of the building envelope is undoubtedly the front facade – in particular the trio of visually different layers fronting the three office floors. Specifically, sound-proof aluminium-framed glazing, fronted by a distinctive white metal, diamond-lattice brise soleil with live plants forming a soft, calming green layer in the space in between.

Anibal’s side walls project 40 cm beyond the front glazing plane, forming a continuous vertical mounting surface for the metal element and creating the space for the planting between the two layers.

“Our feeling was that a lattice-style brise soleil opened up more interesting design opportunities than glazing,” says Abreu.

“This design offers effective solar shading from the early sun and filters out sound, yet allows plenty of light into the three business floors of the building throughout the day. It looks visually interesting, whether viewed internally or externally, and it looks impressive from outside in the evenings, when it is back-lit.”

Abreu adds: “Adding a self-watering planting layer between the brise soleil and the glazing provides a visual stimulus that, seen from inside, softens the rigidity of the latticework and creates a more natural-feeling work environment.”

Planting is in long, deep, glass fibre troughs resting on projecting, specifically-shaped concrete floor beams running across the front at each level and also pinned to the wall just below the glazing. The outside of the troughs are clad with powder-coated, dark-grey aluminium extending down and wrapping under the beams to form a soffit for the level below.

A horizontal run of toughened and soundproofed aluminium-framed glazing overlooking the troughs on each office floor and forms the third and final layer, complete with opening access windows for maintaining the greenery.

Above and slightly set back from the metal facade, a neat palisade of red-brown cumaru hardwood, commonly used in Brazil, linked with subtle, horizontal stainless steel rods forms the softer looking front of the rooftop terrace.

At ground level, a similar wooden palisade creates a narrow screen in front of the discrete, small glazed entrance to a small lobby. To the left of the entrance a large up-sliding electric door, made from perforated aluminium to allow light to penetrate, which provides access to the internal parking.

The 10.7 metre by 11.5 metre metalwork lattice was the most complicated element to design and execute and the team worked closely with Sao Paulo-based metal fabrication specialists Tecnosystem to create it.

“While it’s a bespoke design, it’s made from off-the-shelf, commercially available

4 metre-long, 5 mm- thick and 15 cm-wide aluminium strips with round perforations,” says Abreu. “Tecnosystem customises the strips with precision-cut slots for accurate onsite assembly, enabling them to be fitted and bolted together at the required angles using tiny, almost invisible, brackets.

“Technosystem installed the structure – attaching it to the building with support pegs deep-set into the projecting side walls and shaped floor beams in a fairly tricky, six-week assembly programme involving scaffolding. It was a difficult process to get right.

“All strips are electrolytically painted white, using a highly weather-resistant product. The white helps define the diamond pattern of the aluminium and provides strong colour and textural contrast with the dark aluminium panels and wood elsewhere. All materials are salt-resistant as the ocean is just a couple of blocks away.”

Overlooking the front of the building, it is bordered by a combination of low concrete walls clad in granite and tall cumaru fencing with the same granite tiling on the floor.

Abreu continues: “While the building is 90 per cent LED lit, the roof has no photovoltaic panels as it is too small to make it viable to install them.

“This gave us the opportunity to create the roof terrace, a pleasant exterior space for rest and relaxation or casual meetings. To maximise its usability we included an electronically controlled canvas sliding roof to provide shower protection and shade when needed.

“The building is mechanically heated, cooled and ventilated, so we placed the plant and skylights out of sight beyond the roof terrace perimeter, within open-topped, concrete partitions. Integral rooftop gutters drain any rainfall away through internal, concealed downpipes.”

The concrete slab that forms the roof is covered with single-ply membrane and insulating styrofoam, apart from the garden’s gravelled area. On other levels the main interior flooring is made from reclaimed hardwood.

Concluding, Abreu comments: “We are pleased with the aesthetics and functionality we have achieved for the Anibal Building envelope, particularly given the constraints we faced,

“Our clients tell us they’re happy with the way the building looks and works, and tenants say they find it a pleasant physical environment to be in. So, it looks like we got the design right.” 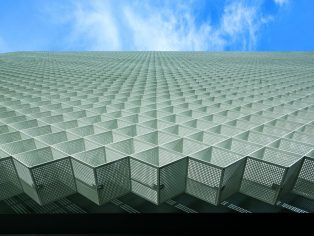