The interior fit-out specialists DG Professional Interiors were commissioned to build an ‘act of architectural theatre’. A celebration of British design and the eclectic mix of food and drink we have within these shores, a ‘reveal’ was created where various restaurant & bar spaces were ‘exposed’ as the evening of the Awards progressed. Entirely white, the set was highly dynamic and interactive.

The Restaurant and Bar Design Awards, now in its sixth year, is the only awards in the world dedicated to the design of food and beverage spaces. This covers every imaginable space, from ships to airports, museums to burger vans and from revered Michelin-starred establishments to the fleeting dynamism of pop-ups.

Taschen published a book about the Awards in 2014.

DG Professional Interior’s design brief was one of the most interesting they had been involved with. They developed the final design based on initial concept designs from the three designers. Challenges were many, meeting expectations due to the multi sponsor input, designing and implementing the ‘reveal’ process and logistical planning for setting up, setting down and removal. The result was nothing short of spectacular, everything went like clockwork and gauging by the applause given by the guests at each reveal, they delivered and exceeded any expectations.

Building Construction Solutions’ (BCS) brief was to develop and coordinate the design and build of ‘The Great Reveal’ concept. The key challenges were to interpret and develop the initial brief with the designers and to enable the contractors to build the multifaceted vision. Managing the numerous designers, suppliers and contractors; and ensuring all component parts, be it stand alone or linked with others’ works, came together as planned. The result was a fantastic and seamless delivery of the most entertaining Awards to date, a truly spectacular event and exactly as was envisaged from the outset for ‘The Great Reveal’.

As the exclusive signage partner for the Awards, Harper Signs were invited to design and manufacture branding for the overall awards event including the stage, food servery and the bar. Their challenge was to offer signage products that blended in with the overall design concept. Their understanding of the brief was paramount leading to superbly made signs including a
magnificent white neon Restaurant & Bar Design Awards ‘Halo’ at the centre of the Awards stage.

Michaelis Boyd Associates were asked to create an entirely white restaurant servery inspired by British music from the 1970s. Designing in monochrome was the key challenge that defined their approach. They were keen to focus on texture and material to create variety and intrigue. Their design referenced different music storage devices from the 70s – vinyl, cassettes, VHS tapes and floppy discs – a collection of each forming a side of the servery. In the centre, a collection of musical devices were sprayed white to form an abstract sculpture.

Harrison’s musical theme was the noughties. This provided union flag references which evoked the perfect form for the centre stage and allowed for multi-directional presenting. Using various white finishes sprayed onto three styles of textured board, the stage took on a luminous and dynamic character when defined by runway lighting. The illuminated winners ‘halo’ suspended above the stage became the central feature of the awards venue focussing all attention towards the winners and provided a subtle if deserved crown.

d-raw was invited to design the pop up bar. The brief was to depict Victoriana Britain inspired from that era’s music. They looked to the wrought iron structures of the Victorian period by Decimus Burton and Richard Turner who designed and built the Kew Garden palm house. The challenge was to recreate the scale and proportion of the 19th century structure in a warehouse space with a ceiling height of just four meters. The result on the evening was a stunning lace like structure representing the wrought iron botanical gardens and exhibition halls of the great Victorian era.

Firefly’s brief was to create a sense of animation and theatre which would respond to the various ‘reveals’ of the evening. Each element was revealed from behind removable walls to let the events unfold and lighting was crucial to fully realise this effect. Working with the various designers, they used LED sources integrated to the stage and façades and halogen spotlights for the main areas in order to create the different focus areas at the relevant times of the evening, including the Union Jack stage.

Halo’s brief was to produce a sound, lighting and AV system that was suitable for the 1000m² hall and would allow both a background ambience and high drama at certain times and places around the space so that the guests’ focus could be distinctly drawn to each reveal in turn. After installing all the apparatus, their team coordinated music and audio-visual presentations to a very precise timetable, which inspired several rounds of applause. 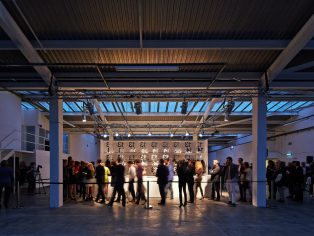