The European Hotel Design Awards 2014 is now open for entries

Internationally acclaimed as the leading pan-European competition to focus on excellence in hotel architecture and design, the Awards are organised by Sleeper magazine and attract the hospitality industry’s brightest stars competing in a variety of categories. The winning tastemakers will be revealed during a dinner and ceremony at the Park Plaza Westminster Bridge in London on 25 November.

Widely celebrated for their visionary role in establishing the value of hotel design, The Awards are distinguished by a meticulous and comprehensive judging process based not only on creative merit but also on commercial viability. Each shortlisted entry is visited by a member from the panel of judges.

“As a benchmark for excellence, innovation and creativity, the European Hotel Design Awards bring gravitas and recognition not just to the design community but across the hospitality industry as a whole. The breadth and diversity of projects entered make this one of the industry’s top accolades, and I look forward to chairing this prestigious competition.”

The Outstanding Contribution Award (for an individual, selected by the judges)

Imagination and style were in abundant supply in 2013, raising the bar even higher for this year’s entries. The Alpina Gstaad designed by The Gallery HBA stole the show, winning three awards including the coveted European Hotel Design of the Year. Honoured with The Outstanding Contribution of the Year Award was Ian Schrager, co-founder of Studio 54 nightclub and originator of the boutique hotel concept in the ‘80s as well as many other ground-breaking ‘modern lifestyle’ concepts which have revolutionised the hospitality industry.

The deadline for entries is Friday, 31st May, with the shortlist to be announced on Friday, 25th July 2014. For further details and to submit entries visit: www.europeanhoteldesignawards.com 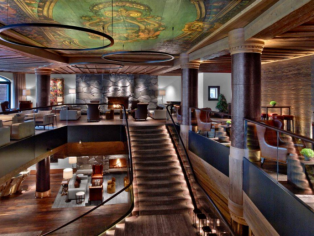 The Alpina Gstaad by The Gallery HBA