The Edge – Could this be the world’s smartest workplace?

Imagine an office more energy efficient and sustainable than just about any other in the world – a smart building that directly interacts with its users through a mobile app. Flexible workspaces enhance personal efficiency and creativity rather than ‘chaining’ occupants to specific desks and space is always used in the most energy-efficient way possible.

That would be a building of the future, surely? Actually, it’s already here, and it’s called The Edge. A substantial, gleaming steel and glass addition to Amsterdam’s business district with superb transport links, it opened for business last year with forward-looking professional services giant Deloitte as its primary long-term tenant.

Designed for developer OVG Real Estate by leading British practice PLP Architecture, The Edge has been hailed as the greenest building in the world, rated BREEAM Outstanding with the highest sustainability score ever awarded – 98.4 per cent. It’s picked up a number of international environmental and design awards, including best new office building in the BREEAM Awards 2016.

OVG worked closely with Deloitte, who were looking for a green office building with attractive, socially interactive, flexible workspaces. In response PLP designed a highly energy-efficient, sustainable landmark building that embraced Deloitte’s workplace philosophy. Its sophisticated, interactive building management system (BMS) monitors and controls how the building is used as well as its energy consumption.

“Deloitte wanted to bring together all of its Amsterdam employees in a building specifically designed to make them feel part of the larger organisation,” explains PLP Founding Partner Ron Bakker.

“The real heart of this project is providing flexible office space, so there are no fixed office desks – not even for the CEO. Deloitte recognises that different groups of people have different ways of working and communicating so a flexible design was needed to reflect that. Research by Deloitte has shown only 25 per cent of an office workforce needs to be sitting at a desk at one time – the other 75 per cent are doing something else.”

“OVG and Deloitte wanted this building to be as sustainable as possible. Every decision to invest in sustainability needed to deliver a return within 10 years.”

Design vision
The Edge is a U-shaped building constructed around a huge, central, north-facing atrium and is adjacent to a motorway, a bicycle route and various public transport connections. At 15 storeys it is the maximum possible height for its location near Schiphol Airport.

“The atrium generates the architecture and the massing of the building, and captures what the building is all about,” explains Bakker.

“It’s the hub that all the other elements are related to. Everybody operates in or around it and they can look across it or down and see each other quite easily. Being the location of the lift lobbies and reception it’s a major circulation area as well as a casual meeting space. Additionally, the atrium helps mediate the noise and pollution from the nearby motorway.”

With a minimal steel frame construction, daylight from the north floods the space. In fact, some two thirds of the building benefits from this cool, mostly sun-free light, dramatically reducing solar gain. The roof has low-e roof glazing with solar controls but, surprisingly, the curtain wall glazing does not have solar-blocking characteristics.

With spans up to 40 m long, the atrium roof sits on relatively slender columns. This lightweight construction is possible because the roof is supported by the building on three sides and bolstered by two ‘bridges’ suspended from the roof on the sixth and ninth floors giving lateral stability and dealing with wind loading.

Other facades are exposed to more direct sunlight. The east and west facades are made from solid, punched load-bearing concrete slab, clad in aluminium with low-e glazing recessed 20 cm into the walls to increase shading.

A similar approach applies to the south facade, but the vertical cladding comprises photovoltaic (PV) panels, providing shading for windows and creating a striped look from a distance.

They provide enough electricity to power all the laptops and telephones and up to 40 electric car charging points in the underground car park. When combined with the building’s extensive rooftop PVs and a remote PV network on University of Amsterdam buildings nearby, The Edge generates a substantial amount of the energy it uses, and it uses 70 per cent less electricity than a typical contemporary Dutch office building.

Internal variety
PLP was responsible for the interiors of the public spaces, and materials for the reception and atrium areas including the stairs, and worked closely with Fokkema & Partners Architecten who designed the interior finishes on the other floors.

“The wide variety of spaces reflects Deloitte’s approach to work and the fact that people like to sit in different spaces for different tasks. For example, there are coffee and breakout areas everywhere – making up a quarter of all workspace.”

There are also formal meeting rooms, with glass cabins to offer greater privacy.

“There’s an indoor terrace extending from the restaurant and this in addition to the atrium floor space can be used as casual work space. Only the receptionists and facilities management staff have fixed locations and only the toilet blocks, stairwells and car parking areas do not get natural light.

One unexpected surprise has been usage of a ‘deck’ area known as ‘the cabriolet’, sitting exposed, close to the atrium’s facade on top of a four-floor section containing offices and the restaurant (pictured left). Bakker explains: “We doubted people would want to use it because it has no ceiling, gets a downdraft in winter and technically speaking the light is substandard – yet it has proven to be one of the most poplar work areas.”

World-class sustainability
The Edge’s ventilation and heating system exploits the local district’s natural aquifer beneath the building, using the water’s consistent 13°C heat to regulate the building’s temperature in summer and winter with minimal energy use, enhancing its sustainability credentials still further.

Water is pumped round a network of tubes within thermal ceilings on each floor, the water being relatively warm or relatively cool in relation to the air temperature, depending on the time of year.

Fresh air is drawn in and pushed into ceiling spaces and warmed or cooled by the pipes and mechanically circulated through the ceiling systems, then ‘leaked’ into the atrium to maintain a comfortable temperature, before being drawn back into the plant room at the top of the atrium. Rainwater is harvested and used to water the landscaped areas and gardens and flush the building’s toilets.

Externally, an attractive landscaped terrace sits between the building frontage and the motorway, forming part of a wildlife corridor. As well as its continuous path of carefully selected vegetation attracting bees and other beneficial insects, there are discretely located bird and bat boxes.

The Edge’s ‘workspace reservation’ system, linked to the BMS, also plays a crucial energy-saving role, a fact acknowledged by Andre Droge from DGMR, the project’s BREEAM Assessor (BREEAM-NL and BREAM International). He explains:

“People book workspace in advance through the smartphone app. The BMS then offers them an optimum area in terms of both the task and energy usage.

“For example if it’s hot the system might suggest a workspace in a cooler north-facing area. This makes it possible to use some floors very efficiently; in some cases you don’t need use them at all, saving a lot of cooling and heating.”

Interactions between people and the building are carried out via ethernet-powered LED ‘connected lighting’ units, linked via wi-fi and each possessing their own IP address. They communicate with the building through sensors that measure movement, location of people, lighting, CO2 levels, temperature and humidity.

Through the customised phone app, occupants control some of these elements – temperature, humidity and lighting – to enhance their local environment. The building can even be asked to preset working conditions to known preferences.

“In many ways The Edge represents the future of office buildings. It has sustainability designed into its architecture and interiors, and boasts excellent energy performance and impressive ecological features. The flexible workspaces combined with building management and reservations systems allow for maximum efficiency.”

“To succeed in this way, sustainability has to be in the ‘genes’ of the entire team – clients, architects, stakeholders, constructors and suppliers. Everyone has to be ambitious from the outset –  just going for the low hanging fruit won’t earn you BREEAM Outstanding.”

“Only by stretching to grasp the difficult challenges, as the team behind The Edge did, do you create a world class example of a sustainable building like this.” 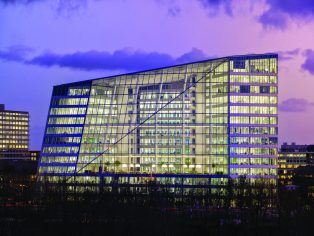 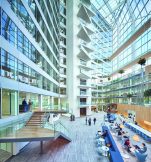