The City of London Building of the Year 2015 winner announced

The Leadenhall Building designed by Rogers Stirk Harbour and Partners and developed by British Land and Oxford Properties is the winner of the inaugural City of London Building of the Year award.

The winner was selected from some 15 city buildings whittled down to a shortlist of four, including new construction, extensions and refurbishments. The three buildings to join the Leadenhall building on the shortlist were St Bartholomew’s Hospital by HOK, 8–10 Moorgate by Allies and Morrison and 6 Bevis Marks by Fletcher Priest.

The City of London Building of the Year 2015 award will be presented at a prestigious event, attended by Lord Richard Rogers, on September 16th 2015 at the Architects’ Company Installation Court Lunch at the Stationers’ Hall. The winner and all of the shortlisted entries will be unveiled in an exhibition that will be open to the public, running from 17 September to 16 October, in the City Centre in The Guildhall.

The shortlist and winner were assessed by a jury chaired by Paul Finch, programme director of the World Architecture Festival. The criteria was to seek out the buildings that support the ambitions of the City of London in delivering a world-class working environment, by evaluating both the quality of the architectural design and the impact the building has had on the city street scene.

Organised by the Worshipful Company of Chartered Architects (WCCA), the City of London Building of the Year, allows members of the public to nominate a building of their choice and aims to recognise the extraordinary examples of contemporary architecture across the London cityscape.

Master Elect of the WCCA Peter Murray commented, “The City of London is home to some very fine examples of contemporary architecture. We are keen to support good design and to encourage City businesses to do so in the future.” 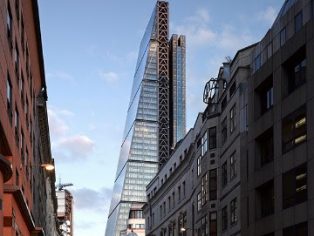