With house prices rising and the housing market increasingly crowded, the number of people eager to get on the property ladder is currently outstripping new builds. To solve the problem of not being able to afford a deposit and avoiding the nightmare of surveys, chains and mortgages altogether, some are abandoning the land, and taking to the water instead.

The average house price for a three bedroom home is £226,887, while a houseboat costs in the region of £60,000-£100,000 (BBC, 2010). But it’s more than this simple saving that makes life on the river so appealing. It offers a chance for a greener, more sustainable lifestyle. Living on a houseboat can make things previously taken for granted more challenging, making you much more aware of the things you do. The previously simple act of turning on a tap or an appliance becomes a considered decision. Necessary minimalism cuts down on your carbon footprint – as you use less, you waste less.

For the houseboat community, estimated to be around 30-50,000 people in the UK (The Telegraph, 2011), solar is increasingly becoming the choice for electricity, combining a portable, wire-free solution with the sustainable lifestyle a houseboat offers.

A new prototype for sustainable living

Sanitov Studios is a design think tank which develops sustainable designs for an increasingly urbanised future. With renewable energy specialists Enviko, Sanitov has developed one of the most sustainable homes in London, a prototype houseboat. Called The Ark, it will be moored at Hermitage Wharf on the Thames.

The Ark is part of the Urdaimonia Project, which looks to make the UK’s neglected waterways as useful a part of urban infrastructure as roads. With sustainability a major focus for the houseboat, The Ark was built using renewable energy and it is built using locally sourced timber, with energy efficient lighting and rainwater recycling. But what really makes the prototype houseboat unique, and makes it a design with much future potential, is its use of – and reliance on – solar electricity.

The upper deck of the houseboat has been fitted with Panasonic’s flagship hybrid solar module, the H250. This 2 kWp solar photovoltaic (PV) installation will produce 1716 kWh whilst offsetting around a tonne of CO2 emissions, annually. A typical household uses 3300 kWh annually, while the houseboat will aim for around 1000 kWh.

Houseboats are notorious for welcoming only the hardiest – if you need a hair dryer, straighteners and various other electrical pampering devices to get through the day, the houseboat life wasn’t for you. The prototype houseboat will mean a less austere existence, with an emphasis still firmly on reducing energy use.

Making this possible is Panasonic’s hybrid solar module, which is more efficient than typical Mono-crystalline and Poly-crystalline modules – a necessity when dealing with a restricted space. When solar panels are fitted on a typical, non-moving home, it’s important to make them south-facing and at a specific angle to get the most from them. This is challenging with a moving structure, so the solar panels must be efficient enough to make position less important.

The solar panels were fitted by Enviko Renewable Energy Solutions, after a process of carefully surveying the houseboat and planning how to make the most of the available surface. Enviko was one of the first members of the Panasonic Solar Premium Installer programme. The programme promotes and works with companies who meet strict criteria and gain accreditation. Premium installers provide the highest standards of technical service and support, and customers can be assured that they can trust the company providing and installing their new solar panels.

Along with other projects such as the Blackfriars Bridge – the world’s largest solar bridge – and the LEZ, London is producing prime examples of how a sustainable future is possible.

The Urdaimonia Project houseboat is a futuristic, bespoke project aiming to make a point about our waterways, but it is also a proof-of-concept of the value of solar power. Emissions from marine transport are considerable, making it a potential growth market and a good target for lowering emissions and meeting obligations. And if a moving home can reduce its carbon emissions to near-zero using solar, then the more traditional, static home will be able to get even more from this technology. 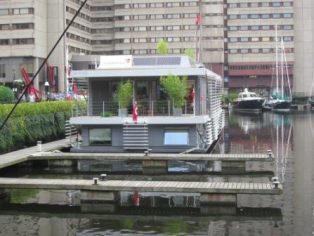 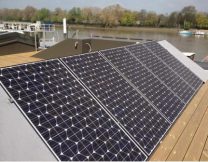