The Architecture of Transgression, Guest-edited by Jonathan Mosley and Rachel Sara

Is architecture in danger of losing its edge and its prized status as one of the pre-eminent visual arts? This title of Architectural Design (AD) highlights the positive impact that working on the architectural periphery can have on the rejuvenation of mainstream architectural culture. It emphasises how transgressive activities have the potential to reinvent and reposition practice: whether it is subverting notions of progress or process; aligning with political activism; pioneering urban interventions; actively destabilising environments or breaking barriers of taste.

Drawing on contributions from architects and commentators internationally, The Architecture of Transgression includes a discussion of transgression as a cultural concept by eminent UK sociologist and author Chris Jenks, and an interview with the influential New York-based architect and educator Bernard Tschumi, which revisits his 1976 essay ‘Architecture and Transgression’ and discusses how his thinking has evolved for the world today.

The volume closes with a counterpoint by Patrick Schumacher, partner at Zaha Hadid Architects, who argues that ‘transgressions are only productive during revolutionary periods at the beginning of a major cycle of innovation, and that in order to be productive, transgressions must remain within the discipline’s bounds determined by the functional differentiation of society’. Other contributors to this edition include Catie Newell, Edward Denison, Guang Yu Ren, Robin Wilson, Doina Petrescu, Constantin Petcou, Alex Römer, Naïm Aït-Sidhoum, Louis Rice, Ion Sørvin, Kim Dovey, Alastair Parvin, Can Altay, Ulrich Beckefeld, Karsten Huneck, Silvia Loeffler, Didier Faustino and David Littlefield.

The Architecture of Transgression is available wherever books are sold. Guest-edited by Jonathan Mosley and Rachel Sara, Published by Wiley, December 2013, Paperback £24.99. 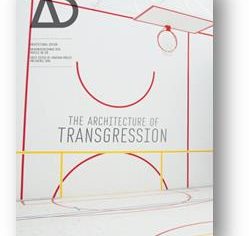