This year’s prize has been awarded to Ioana Giurgiu, of Diploma Unit 18, for her project ‘SMFoF. Uncovering the factory in nature.’ Through an exploration of a Mediterranean salt marsh, which is being rescued from its current polluted and degraded state, the proposal aims to introduce a new understanding of nature and its inherent processes. Rather than attempting to emulate nature, the project focuses on understanding the potential uses of naturally occurring processes. The study examines the way in which the marsh performs the role of a factory, as natural phenomena suggest potential new ways of fabrication.

“Although Ioana has explored the typology of the salt marsh for the purposes of this study, her approach has wider applicability for a range of ecological sites – this is one of the aspects that most impressed the jury panel. There are many examples of architecture replicating natural growth patterns or utilising the inherent efficiency of natural forms. However, the idea that natural processes can be understood and potentially utilised in an industrial base is an interesting way of creating a new, more harmonious model of production.” 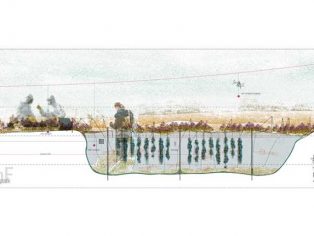