The Foster + Partners team has submitted a detailed response to the Airports Commission’s call for evidence, addressing surface access, costs, delivery and an analysis of the environmental, economic and social impacts of a new airport on the Isle of Grain in the Thames Estuary.

Increasing hub capacity in the South East is vital in ensuring that Britain has the global connectivity needed to support the future growth of its economy. One million people will live within Heathrow’s noise contour – a third runway would expose the capital to even more unacceptable levels of risk, noise and pollution, aside from the impact on its urban neighbours. The country’s hub airport must also be able to operate 24-hours a day and this is only possible in the Thames Estuary.

Heathrow’s third runway will cost £11 billion – a brand new airport with four runways and the capacity for future expansion will cost £15 billion. The planning processes for both are identical and construction time is only slightly more. A third Heathrow runway would be full within a decade of opening, necessitating a fourth runway.

The Thames Estuary already has high capacity public transport links. By creating a short connecting spur, the Isle of Grain can benefit from high-speed rail links to the rest of the UK and the new airport will be less than 26 minutes by train from St Pancras.

There is rising demand for new homes and jobs, in line with population growth – London is growing 20% in the next 20 years and the thrust of development is to the east. The new airport underpins this, and can balance the economies of east and west London, unlocking sites for housing. Heathrow can be transformed into a redevelopment site the size of an inner London borough, in anticipation of London’s inevitable further growth.

The Environment Agency is currently identifying and funding more than 800 hectares of new habitats for wildlife in the estuary, which are being displaced by rising sea levels – this is work that the Thames Hub can help to fund. Rather than spending £1bn to move the M25 to enable Heathrow’s expansion, this money could be better used to protect and replace habitats already under threat.

“Since the Airports Commission submission a year ago, the need for increased airport capacity has become even more urgent. Britain will need to plug-in to the network of major new hub airports being built and planned around the world, for example in Istanbul, Doha, Dubai, Beijing and Mexico City. If you cannot fly through London and connect to the destinations these new hubs offer, then trade will simply go elsewhere.

It is time to get serious about the issue of airport capacity. Britain needs an effective long-term solution, not the usual short-term fix that is Heathrow’s proposed third runway. Rather than boosting growth, expansion at Heathrow would have the opposite effect. The unacceptable levels of risk, noise and pollution would threaten London’s leading reputation as a world city.

Heathrow would play a major role in the transition to a true hub airport in the Thames Estuary. Our experience in Hong Kong proved that it was feasible to relocate overnight from Kai Tak, in the heart of the city, to the new Chek Lap Kok airport, on a man-made island with a fast rail connection to the centre. As in Hong Kong, Heathrow would unlock much needed space for London’s long-term growth.

In terms of connectivity alone, the Thames Hub would serve 191 long-haul destinations, compared to Heathrow’s 126. London today needs to follow in the footsteps of its nineteenth-century forebears and invest boldly in infrastructure. Only long-term thinking will properly serve the demands of our future generations.” 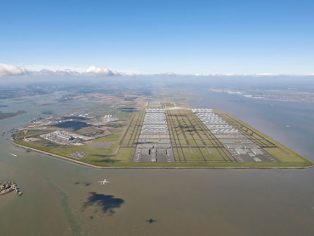