Tetrosyl’s HQ gets a little extra polish from Encasement

Tetrosyl, Europe’s largest manufacturer and supplier of car care products and the company behind a range of well known brands, including T-Cut, CarPlan and Carlube, has spent £3 million transforming the eight-storey former tax office building into its new HQ after relocating from Bury.

An important part of the extensive refurbishment and upgrading of the city centre building, was the creation of the spacious new reception foyer, which not only presents Tetrosyl’s business to UK and international visitors, but also showcases the company’s key products and its long involvement with motorsport.

As the entrance foyer design needed to accommodate a number of existing concrete structural columns, Tetrosyl chose to turn them into a feature of the new interior by using elliptical aerofoil shaped casings from Encasement, which are manufactured from 3mm thick brushed aluminium

In total, eight column casings from Encasement’s Forma range, were designed, manufactured and installed by the company, which measure 590mm wide by 1,575mm long and range in height from three metres at the rear of the reception area, up to five metres at the front where they flank the main entrance doors.

To accommodate the differing heights and locations, the column casings were manufactured using slightly different profiles, so that they didn’t occupy useful floor area unnecessarily. In addition, three of the casings incorporated a stepped design, to allow for a change in ceiling height.

“During our 10 year history we have been involved and a diverse range of prestige projects and Tetrosyl’s HQ is one of the most striking, as it demonstrates how a unique column casing design can not only provide a practical solution for covering structural supports, but also add to the quality of the finished interior.” 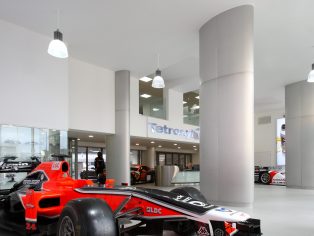