TESTRAD Consortium, following a schematic merger with global architectural design firm Gensler, responded to the call from the Airports Commission, with plans for a new airport in the Thames Estuary, London Britannia Airport. The six runway London Britannia Airport would position London as the gateway for Europe by offering travellers a European hub airport able to operate around-the-clock. Built on a new island in the Estuary, the proposed new airport would also minimize disruption to London residents.

Skies across the world are becoming increasingly overcrowded. In Europe, flights are expected to increase to between 70 and 120 percent above 2007 levels by the year 2030. Figures from the Department of Transport indicate that if capacity could be provided in the south East of England passenger numbers could increase from 127 to 300 million per annum by 2031. London Britannia Airport would be able to accomodate 172 million passengers per annum (MPPA) with the potential for expansion to 200 MPPA at a total cost of £47.3billion and delivered in seven years after planning approval.

“In many respects this is the most ambitious of all the airport proposals, the least contentious, the easiest and the most cost effective solution.” commented Ian Mulcahey, Project Director and Managing Director, Gensler. “Our professional team have spent many months identifying the optimum location in the Estuary for the new airport. Unlike the historic Maplin Sands site and the Isle of Grain we have settled on a location that avoids the sensitive land adjacent to the Estuary and instead will create a new island.” continues Mulcahey.

Traditional, land-locked airports cannot expand sufficiently to meet dramatic global increases in flights and passengers. Heathrow is already causing immeasurable expense in losses related to delays, complicated flight routes and increasing fuel consumption, all of which result in higher operating cost for airlines, higher ticket prices for passengers, and unnecessary increases in noise and greenhouse gas emissions. Passengers would be able to access the new six runway hub airport via existing high-speed rail, a one stop extension to Crossrail, an enhanced direct rail link to Waterloo and a dedicated direct high speed link to a central London check in.

Vehicular access would be dispersed to all the landbased departure/arrival terminals and rail gateways with the main landside gateway terminal located at Ebbsfleet. All the primary logistics are provided at a separate dedicated land based logistics park at Sheerness.

“The new London Britannia Airport master plan gives London the airport it will need to support it’s world city status into the 21st century. It also provides a solution to the challenge of incorporating London’s expected growth in population of 2m and a facilitiy which can be linked to the whole of the UK while both the East and West of London will each benefit from regeneration.

TESTRAD also propose a new future for Heathrow, transforming it into a major new city district utilising existing infrastructure to provide additional homes for 300,000 people and employment for over 200,000.

“TESTRAD are committed to a common vision, to redefine the airport of the future. Learning from Britain’s historic legacy for groundbreaking engineering concepts we will capitalise on today’s best of British skills and innovation to create the most efficient and convenient airport in the world.” 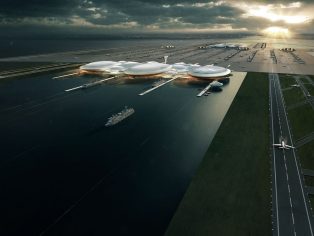