“A top-class whole where the modern exterior is matched in the interior”. This is how the jury motivated its choice in the Swedish Fortifications Agency’s architectural competition when awarding first prize to Tengbom for the new equestrian centre for the Swedish Mounted Royal Lifeguards at K1 in Stockholm. The prize ceremony was held on 19 November at the Swedish Army Museum in Stockholm.

The Fortifications Agency’s architectural prize is awarded every third year. The prize is intended to develop military building traditions and inspire good architecture in defence properties. Three entries were made ahead of the 2014 awards and the first prize went to the equestrian centre Kavallerikasern 1 (K1). The centre was designed by Tengbom who were also general consultant for the assignment.

“The building is awarded the Swedish National Fortifications Agency’s architecture prize for 2014 for its elegant adaptation to both the Royal National City Park and the barracks environment as well as for a top-class whole where the modern exterior is matched in the interior.”

“We are both proud and extremely pleased to have won this competition. Our idea was to try to create an equestrian centre which is both functional and well-adapted to the cultural-historical environment. The design theme is a symmetrical axis which goes through the principal building’s main entrance and cuts straight across the parade ground. A suitable approach for a military building,”

The building was inaugurated in the spring and is used by the Lifeguards, the Swedish Mounted Royal Lifeguards and the Police Cavalry for education and training, but can also be used for public shows and competitions. It has seats for 750 spectators and contrasts with the surrounding brick buildings with its Falu red wooden facade, horizontal windows and asymmetric roof lanterns. 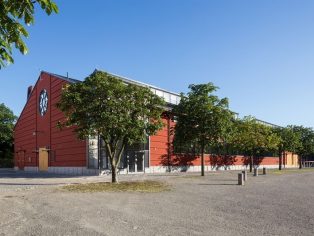