The word style derives from the Latin, stilus – a stalk, writing utensil or stylus, because people in past times were able to recognise which utensil had been used to write a document. Over time, the meaning evolved from “writing technology” to “way of writing” and then to “a master or a school’s characteristic handwriting”.

Today style refers to an era or epoch in art history or a geographic region’s particular ethnic and cultural style tradition.

Every style comprises not only unifying but also differentiating features. A combination of distinctive design elements expressed in a consistent manner is the basis of a particular style. The unity of a style does not exclude variety – variety is found in unity. No matter whether in typography, fashion or music, each style reflects the spirit of its time: be it restrained Biedermeier or challenging Pop Art. The appearance of buildings from different eras still clearly reflects the style of the times. However, style revivals have often adopted features from the past and reinterpreted them in a contemporary form.

In this edition of Forms & Elements, we would like to present some projects in ALUCOBOND® illustrating modern interpretations of typical architectural styles. 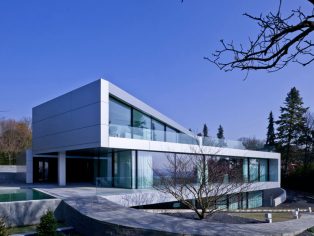