Stunning new images of how the remodelled Leeds Station could look have been revealed. The images have been released as part of a new report, the Leeds Integrated Station Masterplan, which provides the blueprint for the station’s ambitious transformation into a distinctive gateway hub of international significance integrating national, regional and local transport services with HS2 and Northern Powerhouse Rail.

The computer-generated images (CGI) show both internal and external indicative images of what the station, which is already the busiest transport hub in the north of England, could look like based on the set of principles for the masterplan approved by Leeds City Council last month.

These include new entrances, a new central common concourse, new platforms, new public space, a new roof, a new footbridge, external landscaping and the creation of a surrounding station campus for commercial, residential and leisure developments.

The first image shows a new front entrance and adjoining landscaping work to create a world-class main gateway entrance to Leeds, the city which is currently experiencing the fastest private-sector jobs growth of any in the UK.

The second shows the main new internal feature of the remodelled station – a central common concourse connecting HS2, Northern Powerhouse Rail and existing rail services, with an overbridge structure offering access to all other platforms.

The third image shows one of the proposed new entrances connecting to the South Bank and the new city park, with welcoming public space, landscaping and a HS2 train visible in the background.

The new-look station would provide a seamless interchange for people changing trains, with the increased capacity and high-speed rail services resulting in huge increases in passenger and user numbers for the station.

The city centre’s road network would be remodelled with adjoining streets and those under the station being pedestrianised, with the dark arches being transformed into new retail and leisure spaces.

The station masterplan sets out the potential for three million square feet of new commercial development around the station, with a further 7,000-square metres of complementary leisure and retail space inside as part of the new common concourse.

The new images have been produced by world-renowned development experts Atkins, who are leading a consortium of leading global design, engineering and project management consultants on the planning and design work for the remodelling of the station. They include Gensler’s lead for transport and infrastructure Hiro Aso, who was the lead architect behind the redevelopment of King’s Cross Station in London.

As well as the CGI, Hiro Aso has himself also produced a sketch of how the new main station entrance could look which has also been released today.

The images have all been created on behalf of the Leeds Station Board made up of Leeds City Council, Network Rail, HS2 Ltd, West Yorkshire Combined Authority, Transport for the North, Department for Transport and the Department of Communities and Local Government.

Aside from being a key national landmark and integrated transport interchange boosting regional connectivity, the remodelled Leeds Station featuring high-speed rail has a pivotal role to play as an economic and regeneration driver for the city and wider region.

This forms part of the city region’s emerging HS2 Growth Strategy, highlighting how the region aims to work together and with the government to maximise the benefits of high-speed rail.

As well as improved journey times, rail capacity and connectivity, the Leeds City Region is committed to using new high-speed rail connectivity as a catalyst for job creation, education, and helping to tackle poverty in areas of deprivation.

In Leeds the arrival of HS2 is a key element of the regeneration of the South Bank, a 250-hectare regeneration project creating at least 8,000 new homes and generating 35,000 jobs, featuring the new learning hub for the city, a new city park and a reimagined River Aire waterfront. This regeneration will double the size and economic impact of Leeds city centre.

“These fantastic new images of what Leeds Station could look like show not only its exciting future as a distinct and welcoming gateway to the city, but how important it is to get this right by putting people and the visitor experience at the heart of all the plans. It must provide a stepchange not only for the future of transport and connectivity in our city and region, but also as a key economic driver for our future economy providing opportunities for all to benefit from through a clear people-first approach.

“The arrival of high-speed rail is essential to helping Leeds and the wider region fully realise its massive potential, and we hope by seeing these images and reading the report everyone can see the level of ambition we have for this project – Leeds deserves the best and that is our committed aim.”

“It’s fantastic to see how much progress has been made since we first announced our plans to bring HS2 to Leeds. Working together with HS2 Ltd, the Leeds City Region, Network Rail and Transport for the North, Leeds has clearly seized the opportunity that high-speed rail represents both locally and regionally.

“HS2 presents a once-in-a-generation opportunity both to revitalise Leeds and, in the process, rebalance Britain. Leeds’ plans live up to that level of ambition and will leave a legacy that the city and the region can be proud of for decades to come.”

“These new images show what this northern gateway hub could look like and embody the City Region’s aspirations, that high-speed rail will transform our productivity and connectivity. Through this hub and the investment into improved transport links between our towns and cities and other parts of the UK; such as Northern Powerhouse Rail connecting Manchester, Bradford, Leeds and York.

“We will ensure that our talent can access the careers and opportunities of tomorrow, producing a tangible economic benefit which can lead to inclusive growth for all the people who live and work here.”

John Cridland, Chair of Transport for the North, said:

“Working closely with our partners in the development of Leeds Integrated Station Masterplan has provided us with a unique opportunity to ensure that Leeds City Region is well-connected within the north. It’s vital that the future Northern Powerhouse Rail programme, as well as future local rail services, are reflected in the plans for HS2 infrastructure investment. With this station masterplan we are taking the first step towards creating a truly integrated transport hub, combining local, regional and high speed rail services, including our transformational Northern Powerhouse Rail programme.

“Northern Powerhouse Rail will provide faster and more frequent connections between Leeds and other major hubs in the north, transforming connectivity. Creating a shared vision for the future of Leeds station ensures that Leeds and the wider city region will get the most out of this major infrastructure investment, creating a fitting gateway for the vibrant city and providing a catalyst for future growth.”

“We know that a world-class station has the potential to drive the transformation of the surrounding area, driving further investment and improving social opportunities for the community the station serves. That is why we are delighted to be partners in this exciting vision which will transform the city station to create a world-class gateway.

“The masterplan has a clear focus on the future and the arrival of HS2 but can be implemented in phases, bringing benefits to passengers and the city at each stage. We will be working closely with our partners, funders and stakeholders to secure the funding which will make this vision a reality.”

“The Leeds Station district will be one of the largest integrated transport hubs in the UK. It will bring together HS2, the classic railway, buses, coaches and taxis into a single place enabling easier journeys between cities in the Northern Powerhouse and around Leeds itself. The bold vision for the district will ensure Leeds remains a key gateway to the north and surrounding areas.”

Further public and stakeholder consultation will now take place on the masterplan released today, with the Leeds Station plans forming part of a six-week consultation beginning on Wednesday 8 November on the plans for the South Bank. The Leeds Station Integrated Masterplan is available at www.southbankleeds.co.uk and a number of events will be hosted in Leeds Station over coming weeks where people can help shape the future of these proposals. A questionnaire will also go live on Wednesday on the proposals. 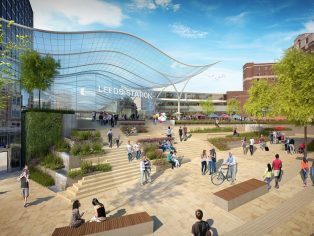 Indicative CGI of what new internal concourse of Leeds Station could look like, connecting all platforms including HS2