We collaborated with French furniture brand, Hetch Mobilier, who used our ColorCore® by Formica Group range on their ‘FLOWA’ collection in the most creative way. Their unique design approach produced stunning results!

Hetch Mobilier, headed up by Furniture Designer, Pierre-Henri Devinaeu decided to combine his creativity with Paper Artist, Maud Vantours to bring the world a contemporary and innovative furniture collection. Soon after their decision to collaborate they discovered that working with our ColorCore range would give them the edge they needed to bring their vision to life.

Pierre-Henri and Maud created a ‘FLOWA’ sideboard and mirror by taking advantage of ColorCore’s matching core and surface to provide a seamless edge. ColorCore’s ability to sandblast, engrave, carve, router and build 3D layered surfaces to breath-taking effect also lent itself well to this project. Here’s the full rundown.

Paris-based Maud specialises in transforming simple materials into works of art, using coloured paper to produce 3D layers that create intricate and inspired patterns in volume. She has worked with Guerlain, Tag Heuer, YSL and Lancôme.

After an exceptional career in architectural firms, Pierre-Henri founded the furniture brand Hetch Mobilier. He aims to conceptualise his life experiences in each of his designs.

When Maud and Pierre-Henri teamed up, only one principle was central to their thinking: superposition. This simple act, of placing one thing on top of another, became the centre of their approach. In ColorCore, they found the perfect material for their vision – and they quickly embarked on a quest to create a contemporary and unforgettable collection.

Pierre-Henri had a long history of using crossed layers of wood veneers in his superposition work. This particular project, however, demanded extra qualities of the chosen material. It had to be resistant, thin, colourful, easily manufactured and able to keep its structural integrity. ColorCore, with its 1.3mm thickness, supreme strength and extreme durability, was the obvious answer.

When we were approached by Maud and Pierre-Henri, it was easy to see the potential in their project. We caught up with the pair to hear their verdict on working with ColorCore.

“ColorCore offers a new dimension in decorative surfaces. The homogeneous colour of its decorative surface through to its inner core allows the ‘dark lines’ sometimes associated with traditional laminate to simply disappear. The through-colour material gives limitless choice in creating a beautiful surface and edge treatment. Furthermore, what is more natural than to choose the brand we automatically think of when you talk about laminate and the brand everyone knows…”

“This piece pushes the use of laminate to new and incredibly exciting outcomes. The cut through applique technique, usually seen in textiles, is applied to our ColorCore material in the most stunning floral pattern. It gives the sideboard depth and a great sense of material use.

“The sideboard incorporates almost all of our ColorCore products. It’s a perfect example of how a multitude of colours can work together harmoniously in one product.” 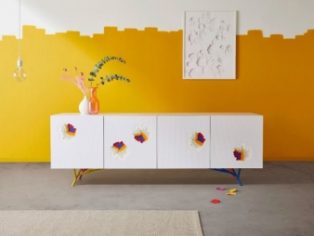