urbanest UK now has 1,067 high-specification, operational rooms across London and is on course to welcome up to 5,000 students annually to its buildings by 2017.

To mark the building’s opening, urbanest and Knight Frank Student Property held a charity climb with around 50 people running up the 27 storey building in the name of two charities – Spear and Willow Foundation.

The building is located at the heart of King’s Cross, the best connected location in Europe, close to the major Universities and Colleges. Over 300 of the bedrooms will be taken by students from the London School of Economics ahead of its 2013 – 14 academic year.

In developing the project, the urbanest team surveyed over 5,000 students, working closely with the University of London Housing services.

Popular features for students include free 25MB broadband, Nintendo wii machines, table-tennis and foosball tables, iMacs, TVs and 200 fold-up bikes. There is also an exhibition area, meeting suite, communal areas, a number of ‘sky gardens’ and a café which will open in September.

“At urbanest, we pride ourselves on developing leading-edge accommodation and we’ve worked hard to make urbanest King’s Cross the highest quality student residence in the capital. We’ve listened carefully to feedback from students about the type of housing they want and the result is a comfortable, remarkably efficient building with fantastic views over Central London.”

“London is a global hub for students with strong demand for quality student housing so it is wonderful to see a scheme like urbanest King’s Cross being developed in an iconic, central location. The young, vibrant tone of the area has been set since the first students entered Central St Martins in 2011 and with the addition of Google and now urbanest, it is proving to be one of London’s most exciting new districts.”

“The Knight Frank Student Property team is thrilled to be a part of urbanclimb, in support of two extremely worthwhile charities. urbanest King’s Cross exemplifies the height of quality in purpose-built student accommodation today and tells the continuing success story of London as a key investment location in the sector. This is something we will be thinking of every step of the 27-storey stair climb!”

The building was designed by Glenn Howells Architects and delivered by an expert in-house project team, with emphasis given to both innovation and sustainability. It has a residential style, with wide corridors, designer kitchens and abundant natural light, so that it doesn’t feel like typical student housing. The main tower is 27 storeys with a 14-storey ‘shoulder’ building and the room types include self-contained studio flats and private rooms in shared accommodation.

urbanest was the UK’s first student housing provider to adopt BREEAM ‘Excellent’ as a minimum standard for environmental performance across all its schemes. At urbanest King’s Cross, solar PV panels supply all power to the common rooms and triple A rated appliances help to reduce energy use.

The building is connected to the central energy plant on the King’s Cross site and also has energy efficient underfloor heating, a green roof, and bird and bat boxes.

Form and function have been incorporated throughout the building. The wallpaper in each room features iconic London images printed on recycled plastic which not only looks eye-catching but can also withstand students sticking posters to the walls.

The kitchens have stone work tops so that hot pans can be set down without burning the surface and each unit has a dishwasher which cuts down on water usage, improves hygiene and helps to avoid arguments amongst residents.

The walls are twice the thickness required under building regulations in order to respond to student feedback about minimising noise levels between rooms.

As with all urbanest buildings; safety and security are of paramount importance with a 24/7 on-site support team, a concierge-like reception and an electronic key-fob entry system.

Renowned artist, Simon Hitchens has created a landmark sculpture which will be installed in the new public courtyard space at the entrance to the building next month. Standing 3.75m tall, the piece will reference the industrial heritage of the site. 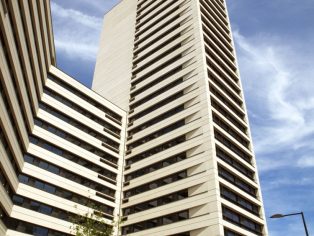