Stratford and Queen Elizabeth Olympic Park has been voted the area in London likely to improve most by 2020.

According to a new poll of over 1,000 Londoners by YouGov and leading international property and infrastructure group Lendlease, more than one in five (21%) London adults chose Stratford and Queen Elizabeth Olympic Park.

This is twice as much as any other area in the capital and ahead of prominent redevelopment districts including Croydon (9%), the City (9%), Tottenham (6%), Canary Wharf (4%) and Wembley (4%).

“Stratford won over the hearts of Londoners in 2012, and now nearly four years on we’re seeing that legacy continue in the minds of people across the capital.

“TfL’s recent rezoning of Stratford, Stratford International, and Stratford High Street stations as Zones 2/3 will save local residents and workers hundreds of pounds a year.

“With the combination of The International Quarter delivering London’s fourth business district, Olympicopolis creating a world-class education and cultural hub, unparalleled retail and the ever improving transport connections, it’s no surprise Stratford is leading the pack as a place to live and work ahead of other areas across London.”

The research follows the recent combined investment of more than £615 million in the first phase of The International Quarter by Legal & General and Deutsche Bank Asset Management which is now under construction as Stratford looks to become London’s fourth business district.

The poll also found that more than one in 10 (13%) would favour working in Stratford over other fast-growing areas as Wembley (5%), Croydon (6%), and Tottenham (3%) due to the opportunity to live and work in the same place. 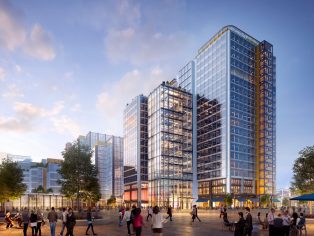