Glenn Howells Architects’ sensitive and contemporary Remembrance Centre has been awarded planning and construction specialist Stepnell has now begun work, in a dramatic next step to enhance the visitor experience at the National Memorial Arboretum in Staffordshire.

The National Memorial Arboretum, part of The Royal British Legion, is the UK’s only year-round centre of remembrance and is home to 30,000 maturing trees and over 300 memorials, set over 150 acres of woodland areas, grassland, and riverside habitats. It is a spiritually uplifting place that honours the fallen and recognises the service, suffering and sacrifice of both the Armed Forces and civil services.

Glenn Howells Architects’ new Remembrance Centre expands upon and incorporates an existing timber visitor centre, which will be retained, refurbished and extended on three sides by Stepnell during a year-long £15.7 million programme. The new building will increase the capacity of the National Memorial Arboretum from 300,000 visitors to 500,000 per annum and will house a rotunda ‘drum’ style visitor experience space, an interpretation exhibition, retail space and a satellite cafe and learning centre.

The new Remembrance Centre will join an existing collection of striking architecture, comprising the Millennium Chapel and the Armed Forces Memorial – the latter commemorating those service men and women who have been killed on duty or as a result of terrorism from the end of the Second World War to the present day.

A timber colonnade unites the original visitor centre with the new building and carries visitors through from the entrance of the Remembrance Centre. The materials mediate the two structures and provide a legible visitor link leading through into a dramatic rotunda space.

The new building’s limestone façade references the Portland stone of the nearby Armed Forces Memorial, whilst a timber portico and slatted timber cloister wrap around the centre, bringing warmth and order to the exterior and complementing the dignified stone. The timber also forms a bond with the weathered wood of the existing visitor centre and Millennium Chapel.

A shared central courtyard space – designed by landscape architects Fira – nestles within the cloisters. Named ‘Heroes’ Square’, it is a partially covered and hard-landscaped formal square for set-piece ceremonies. The rigidity of the square is softened by trees and natural planting, which also creates quiet pocket spaces for contemplation. This public central space forms a transitional route between the buildings and the arboretum beyond.

The existing visitor centre will enjoy a number of enhancements including an upgraded restaurant with a heightened ceiling to provide a light and airy dining space that takes in views over the landscape and Heroes’ Square.

The new Remembrance Centre forms the northern point of the National Memorial Arboretum complex, with the existing visitor centre to the west, chapel to the east, and the magnificent arboretum to the south.

“We are proud to work in this significant and beautiful natural setting. The addition of the contemporary new Remembrance Centre will allow the Arboretum to extend its offer to visitors, bringing together the old and new fragments of this beautiful site into a unified and enhanced complex to be enjoyed by all generations.”

“Over an extended design period, Glenn Howells Architects has become engrained in the Arboretum, gaining both huge insight into the meaning of the site and understanding exactly what is experienced by our visitors. Faced with growing popularity and our wish to further extend our appeal to new audiences, this construction project, now being delivered by Stepnell, is much needed.”

“We feel honoured to be helping deliver this important project to create a new Remembrance Centre at the National Memorial Arboretum. It will transform the experience of the Arboretum’s increasing numbers of visitors, providing expanded and enhanced modern facilities built to the very highest standards.” 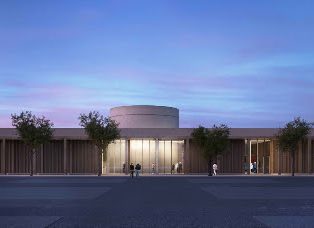