The Musée d’arts de Nantes will open to the public on 23 June 2017.  For this landmark cultural project, the London-based architecture practice Stanton Williams has transformed the existing Musée des Beaux-Arts de Nantes – an exemplary expression of the city’s civic and cultural pride and one of the largest Fine Arts Museums in France outside Paris. Located in the heart of a residential quarter in the city, the Musée des Beaux-Arts consisted of the 19th Century ‘Palais’ and 17thCentury Oratory Chapel.

Stanton Williams’ aim was to transform the introverted image of the former Musée des Beaux-Arts into a vibrant, democratic and welcoming contemporary space that is open to the city and its people. The design adds a contemporary layer to the historical buildings, with two new buildings – the ‘Cube’ extension for contemporary art and an archive facility with a public library. A new basement underneath the Palais has been created to house an auditorium, educational spaces and additional exhibition spaces. A fully integrated landscape design has also been implemented around the museum, with a new sculpture garden located within the urban block.

In response to an all-encompassing brief, Stanton Williams worked with the Museum to design the exhibitions within the galleries themselves, and also collaborated with Cartlidge Levene to create a new overall visual identity for the new Musée d’arts de Nantes. This has contributed to the formulation of a clear visual identity, which unites the museum’s exterior and interior, and creates a holistic museum experience.

“We are grateful to the city of Nantes for entrusting us to transform and extend the City’s Museum of Art, design the exhibition spaces for their exceptional and valuable art collections and create galleries for temporary art installations. The new Museum has been conceived around the collections themselves, creating an intimate dialogue between art and architecture that firmly embeds the new Museum within the distinctive historical setting of the city.”

As part of the inaugural exhibition programme at the new Musée d’arts de Nantes, Stanton Williams has curated an exhibition that details the processes involved in designing a significant public museum. Located in the Salle Blanche ‘L’epopée d’un Project, 2009-2017’ will run for six months from the official opening. The exhibition allows visitors to immerse themselves in the project by covering the entire six-year period of planning and construction through the display of development models from the competition stage, to information about the methodologies and museography involved. The exhibition will also include previously unseen photographs of the construction process, which reveal the complex aspects of the transformation.

Two films will feature in the exhibition; the first documents the entire design process behind the new museum and will include sketches, drawings and model making; the second film, by Studio Cullen Williams, will use the method of time-lapse film to capture the journey of light as it travels through the museum, galleries and translucent marble façade. 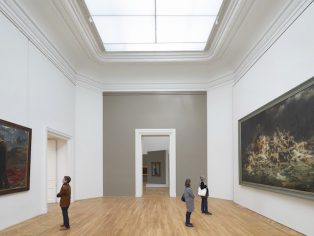 Gallery in the Palais © Hufton + Crow

An architectural model of the completed Musée d’arts de Nantes © Stanton Williams; view from the street towards the Cube extension © Hufton + Crow

The Archive building; the Palais and museum’s main entrance (the ‘Parvis’) © Hufton + Crow