Among the many factors influencing use of metals in construction cost has, not surprisingly, been the greatest. The need for greater sustainability prompted the beginning of change but, for many, stainless steel is still considered expensive. A perceived lack of design scope through association with highly polished finishes has also limited it’s specification. In both respects, however, development of new products has taken the metal to a new level, and this continues to be reflected in its increasing use.

The desire to use colour and texture to create distinctive facades has never gone away and more widespread use of zinc and copper owes much to the introduction of contemporary colours, textures and finishes which are now seen as affordable. Where once there might have been little or no consideration of aesthetics, scope now exists to put a visual stamp on design without loss of functionality or sustainability.

The same is now true of stainless steel for which a variety of colours and finishes are available, one of the best illustrations of how far it has come being English Heritage’s endorsement of a material which, through weathering, takes on the natural patination similar to lead. While clearly wanting to encourage lead’s continued use on historic buildings, it was considered pragmatic to approve stainless steel because of its appearance, long design life and corrosion resistance. Where metal theft continues to be a risk or lack of funds / insurance preclude lead’s use, stainless steel offers the vital balance between retention of the visual aesthetic and long term performance. Being far lighter in weight and having a low coefficient of expansion, tray lengths can be far longer and the stress imposed on a roof significantly less. Unlike lead, stainless steel is not susceptible to cold working fatigue and can be installed and soldered at low temperatures. More importantly, it can be used in harsh environments which would preclude use of other metals.

Such developments are a world away from the highly polished finishes with which many specifiers still associate the metal. Dramatic facades such as that on the John Lewis Store and Cineplex in Leicester undoubtedly take the eye by reflecting the colour and changing light. A 34,000m²rain screen was commissioned in a mirror finish but to diffuse the large area into a series of smaller reflective surfaces the metal was ‘pleated’ at different scales. It is still highly smooth to such

an extent that the finish is virtually self-cleaning. The exterior ‘curtain’ concept provided a distinct identity and has even been extended to such elements as matching screen curtains within the interior.

Low roughness can also be achieved with matt stainless steel and the choice of new colours and textures has created the opportunity to design contemporary facades and roofs which will surely in future become synonymous with the metal. Patterns include linen texture, lozenge and chequer pattern, fine bead-blasted and sand-blasted finishes and even the simulated appearance of leather.

Ferritic grades were developed to bring greater price stability through the omission of nickel and their introduction has removed the cost fluctuation which was also enough to preclude austenitic grades. This has also been achieved without adverse impact on technical performance.

Weight is of course a major consideration when designing any facade. Stainless steel installed as shingles is ideal for large facades such as those illustrated, as a finish such as 2K is highly smooth and polished. Cooper Cromar Architects described it as ‘an elegant stainless steel-clad box’ and indeed the frontage was designed to form a distinctive new entrance feature when approached from the motorway. At only 0.6mm thick it was also estimated to have saved around 18 tonnes in facade weight over an equivalent in zinc or copper. In terms of sustainability it also presents none of the attendant underside corrosion
problems associated with other hard metals.

The design scope provided by stainless steel is seeing it used in diverse projects including transport infrastructure. Whether as a traditional standing seam or shingles, as in the case of a new transport hub building in the Scottish Borders, it provides a permanent, durable matt facade in what again was designed as a ‘statement building’. Given the predisposition to consider stainless steel as uncompetitive against other metals, the most critical element in this particular project was that, by virtue of the weight of material used, it saved over £11/m² over anodised aluminium. Among the hard metals it therefore now ticks all the boxes. 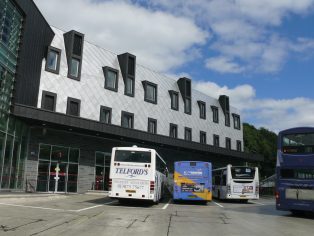  Galashiels Interchange building.This was built as part of the visionary scheme to rebuild the railway between Galashiels and Edinburgh, the UK’s biggest infrastructure rail scheme other than Crossrail 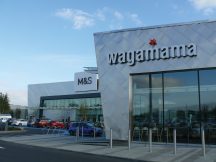 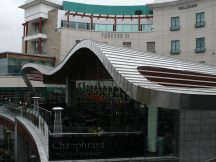