Transforming the International Broadcast Centre into an attractive commercial development meant stripping off the entire facade and replacing it with a glass skin covered with over eight million tiny dots. Stephen Cousins reports.

As large, generic, white buildings go, the International Broadcast Centre (IBC), located in the North West corner of the London 2012 Olympics site, near Hackney Wick, was one of the largest and least attractive.

The biggest structure in the Olympic Media Centre complex, at 280m long and 120m wide, it was easily large enough to fit the One Canada Square tower laid on its side, or six jumbo jets. yet it was just a white steel-framed box with no discernible identity.

This posed a problem for developer iCITY, a joint venture between real estate investor Delancey, and data centre operator Infinity SDC, when the Queen Elizabeth Olympic Park switched into legacy mode and it considered options to transform the building into a mixed use office block suitable for tech firms, artists and creatives.

The IBC was originally intended as a temporary building, only used during the Games, and as such it was supported on a fairly substantial series of portal frames. The facades had no windows, a result of the building being crammed with TV recording studios during the Olympics, and a basic steel composite cladding. In addition, an unsightly gantry frame, supporting several tonnes of aircon equipment, extended across its rear.

“Some people said it was a far more valuable asset as a piece of land and that we should sell it or knock it down, but for the IBC to have been just a one month gig for the Olympics would have been an extraordinary waste of resources and completely unsustainable from a recyclability point of view.”

An initial design to transform the venue was rejected by iCITY for its lack of creativity, so the project went out to design competition. The winning proposal, by London-based architects Hawkins\Brown, is now under construction and exploits the simple concept of ‘crust’ and ‘core’ to break down the building’s bulk.

A 16m-deep crust of office space, around the perimeter, aims to maximise daylight, ventilation and views by stripping off the existing cladding and replacing it with a double glazed unitised curtain walling system. The crust encloses a central core, comprising spaces for tenants requiring no natural daylight, such as the Infinity data centre, UCL’s Bartlett School and departments of engineering and robotics and Wayne McGregor’s dance studio.

“It is quite hard to repurpose a building whose purpose was previously so poorly defined. The Aquatics Centre was always going to remain a swimming pool, the Velodrome has not changed its typology, whereas we had an empty box, which was entirely open to new ideas.”

The studio’s concept was to unpeel the existing cladding and expose this homogenous sealed box to the true industrial and contextual heritage of the site, simultaneously creating physical routes and views through that connect it to the other buildings on the site.

The IBC redevelopment is the centre piece of a £100 million redevelopment of the Media Centre site, known as Here East, which includes the adjacent former press centre and former media conference room. iCITY plans to fill it with a thriving community of tech firms, small-scale artists and creatives, many from the local Hackney Wick area, as part of the wider regeneration of the east London region.

Though Here East’s presence is currently hard to miss, within three years it will be part of a thriving commercial district including The International Quarter, a mixed use development with four million square foot of new workplace and 330 new homes and  the 11 acre UCL East campus, near the Olympic Stadium.

The building’s facade is covered with around 3,000 unique panels of unitised curtain walling, weighing a total 450 tonnes. Most panels feature an innovative and complex digital frit pattern, made up of over over eight million ceramic dots, and dots-within-dots, intended to break down the massive scale of the building into readable sections, as well as add visual excitement.

The dots cascade diagonally across the facades at different angles, drawing visitors towards the locations of three themed main entrance atriums along the west facade, known as the steel mill, the timber yard and the fabric factory – a nod to the factories and warehouses that once occupied the site.

The frit design was inspired by dazzle pattern camouflage, a technique invented by the British artist Norman Wilkinson and used during World War I to protect battleships. This form of camouflage used bold shapes and violent contrasts of colour to confuse the enemy, making it difficult to discern the type of battleship and therefore the level of threat.

Bright orange paint applied to the building’s exposed steel frame provides another military reference, inspired by the interior lining of reversible flight jackets, and will be clearly visible behind the glass. The facade is further articulated through the inclusion of several large projecting balconies and recessed areas punched into the glass.

“This type of printing has never been done at this scale, using this size of machine, to create a continuous pattern that flows across the entire surface of a building. The technique is much faster than traditional screen printing, which requires the creation of thousands of individual printing templates.”

Hard graft was still required from the design team who spent many hours preparing and checking 2D pattern drawings for each panel in AutoCAD, and tweaking them so the dots appear to run uninterrupted across the facade, over 20mm silicon joints between adjacent panels.

Each unitised cladding panel is 39mm thick and comprises two 11.5mm-thick panes of heat-strengthened laminate glazing, separated by a 16mm-wide space filled with argon gas. The frit, and a layer of Sunguard intended to reduce solar gain and improve the performance of the glass, are incorporated within the outer pane.

Here East is designed to BREEAM ‘Excellent’, the clear cladding panels have a U-value of 1.0 W/m²K, and spandrel panels, with black opaque glass, insulation and a metal panel inner face, a U-value of 0.385 W/m²K.

The density and location of the frit pattern responds to solar gain requirements. Grasshopper parametric modelling software was used to calculate dot density and distribution based on both work functions going on inside the building and the geographic location. The pattern is less dense on the north side, where there is more shade, and increases along the west and south elevations.

To prevent employees from going ‘dotty’ looking at spots all day, a clear ‘vision band’ is included at seating height so that people sitting at desks in office spaces can see out. The pattern was omitted entirely at ground floor to enable retailers to fully display their wares.

Entirely glazing the facade should draw attention to the scurrying activity going on behind the glass as workers move around floors and between different levels. This “ant farm” effect is already visible inside the offices of BT Sport, iCity’s anchor tenant, which occupies about a fifth of the building, where researchers can be seen walking between banks of flickering  TV screens on a main floor and mezzanine level.

Further dynamism will be injected into the long east elevation, where the steel gantry structure will be retained and populated by a variety of creative studio spaces, built in timber using the WikiHouse open source building system.

“Part of the idea behind gantry is to provide affordable rented units for artist studios, sculpture, printmaking and photography. Many people can’t sustain the rents being asked for in nearby places like Shoreditch.”

With the unitised cladding now fully installed, and fit out work underway inside, Here East is already a more vibrant proposition than the generic white blob it replaces. Like a chameleon, the glass skin changes appearance at different times of day, and in different seasons. Early morning sun on the north elevation creates a crisp contrast between the white spots and dark office interiors, and at dusk the effect is reversed as artificial light from the building’s interior shines through and the spots are cast in shadow. 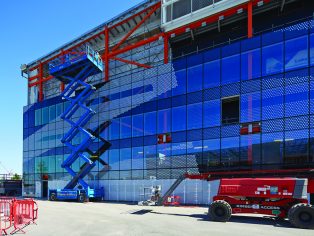 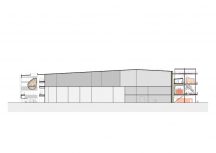