Something old and something new

The new University of Cumbria is not lacking in character and history – and architects are helping it get the message across, as James Pringle reports.

The University of Cumbria may be a newcomer to British higher education, but it has a distinguished pedigree and an impressive array of locations. It is established in Carlisle, Lancaster and Tower Hamlets in London, as well as in Ambleside.

A major transformation is under way at the latter site, which is in the Lake District National Park. John McAslan + Partners is architect, lead consultant and landscape architect.

The £3.8 million first phase of the practice’s masterplan covered critical repairs and refurbishing, and reconfiguring key buildings into a library and student hub creating the heart of the campus. It also involved substantial landscaping that improves linkages and creates new external spaces. The completed work was handed over to the university in January.

Phase Two includes external renovation of Scale How, the Grade II listed house built in the late 1820s and owned originally by Dorothy Wordsworth, cousin of poet William Wordsworth. It was bought in the 1890s by educationist Charlotte Mason, who ran a school for governesses on the site until her death in 1923, and it continued until the 1950s. The local council bought the property and set up a teacher training facility known as Charlotte Mason College.

The premises became briefly part of Lancaster University before being used for teacher training by Lancaster-based St Martin’s College.

Initially the new university mothballed the Ambleside campus, which proved controversial with local residents as it signalled the end of more than 100 years of teacher training on the site.

The university wanted a significant outdoor and forestry component for its base in the National Park. In 2012 it sought the advice of John McAslan + Partners in reopening the campus. The plan was to close a campus in Newton Rigg and to move the National School of Forestry and a number of applied science courses, outdoor studies, and business and enterprise courses to the Ambleside campus.

The new LiSS (Library and Student Services) Building is located in a traditional Cumbrian ‘bank barn’ first constructed in 1929. Initially it was used as an assembly hall and gym for Charlotte Mason’s school for governesses, and more recently as a bar and student union with classrooms on the upper floor.

The place was never actually used as a barn. A ‘bank barn’ is simply a building set into a slope or bank, with the upper floor accessed directly from ground level, while the lower floor is accessed at ground level from the opposite side. The Ambleside site includes a number of such structures, but the Barn Theatre building has been modified over the years.

“Originally most of it would have been at double-height volume. Sometime between the original construction and our project, someone inserted a slab throughout the building to create clearly defined ground and first floors.”

McAslan + Partners found the property in a sorry state, he adds:

“The windows were boarded up for security, and internally it looked as though it had been hacked about quite a lot, with the insertion of the floor, random bits of partitions, storage cupboards here and there, and upstairs the teaching rooms were looking particularly tired.”

With the masterplan considering potential reuse of all existing buildings, the Barn Theatre was clearly the most suitable for accommodating the services required.

“The Barn Theatre and its courtyard sit midway between the southern entrance and the building at the northern end of the site,” says Hughes.

“The idea was to create a central hub, with a library, cafe and flexible offices for services including student support finance and residential accommodation.”

The library is on the first floor, above the offices, catering facilities and social working areas where students can work in groups. A coffee shop for hot drinks and snacks is in a new mono-pitch extension. The extension draws on local vernacular in terms of its materials, but is an obvious modern addition to the original building, Hughes points out. It is clad in stained black timber, striking a contrast with the grey Cumbrian stone of the established structure.

In the existing building the main change on the first floor has been to clear out the series of cellular spaces of former classrooms and to remove the ceilings that had been created, so as to expose the timber roof structure.

“We wanted to open out the whole first floor into one big volume with the expressed roof pitch where you can see the original king post trusses,” says Hughes. “That’s the main library space, where there are now books, reading areas and IT docking points.”

The reconfiguration, a contemporary interpretation of Cumbrian vernacular, respects the original stone fabric of the building, while enhancing the character and quality of the space.

“We haven’t formed any new openings in the 1920s building, which was full of the single-glazed, steel-framed Crittal windows. We’ve replaced them with double-glazed aluminium-framed windows that help with energy efficiency and to improve the U-values. They are modern-looking within the traditional framework of the building: with black PPC (polyester powder coating) aluminum on the outside and timber framing internally, complementing the internal material palette.”

The generous glazing provides views out onto a courtyard – one of the new landscape spaces created as part of the campus redevelopment – and beyond, over the site’s mature landscape.

Modern energy-efficient lighting has been installed throughout the building. The mono-pitch extension has a green roof, as part of a campus emphasis on biodiversity.

Much of the project has used natural or recyclable materials.

“The building is an essay in timber,” says Hughes. “It has a structural glulam frame, and stained timber cladding on the exterior. The internal walls are generally formed from SIPs (structural insulated timber panels) with American white oak decorative linings and there is complementary oak-veneered furniture.

“Wood is the consistent material throughout this new intervention, and that emphasis on material is carried through into the other interventions we’ve made in the retained 1920s building.

“The furniture is bespoke designed and made, and nearly all oak-veneered. It was made by the main contractor as part of the contract works.”

Harmony of materials has been a theme throughout. Another example is the new stone floor, which is compatible with the historic building and brings coherence to the whole phase of the scheme. The granite covering the entire ground floor was also used for paving the courtyard.

Phase One has greatly improved access and services infrastructure across the campus, and all construction work was sequenced to allow the university continuity of service.

Despite the constraints of working within the National Park, McAslan achieved Planning and Conservation Area consent for all Phase One works. Close collaboration with the Lake District National Park Authority was critical.

“The LDNPA were very particular about the materials,” says Hughes. “We had to discuss them in depth and provide samples for approval. It was all managed very well, with planning consultants Deloitte assisting with the process.

“A key aspect of our masterplan has been how we can weave a route the length of the campus, through a series of landscape interventions to help access and way-finding.”

Inclusivity for the university and the wider community has been a major factor. There is disability access for 75 per cent of the teaching accommodation. Induction loop systems have been created, along with fully lit pedestrian routes across the campus, disabled parking, and level access into and within all buildings where possible.

The project brings significant social and economical benefits to the town of Ambleside. Students and a thriving university will help boost the local economy and the university’s revitalised buildings will be used to house community events and lectures out of hours, enhancing the opportunities for adult learning in the community.

Phase One was accomplished in just under two years, from starting the masterplan to completing the construction. Site work will total about 12 months by the time the remaining phases are completed at the end of the summer.

“The new development, which is known as The Barn, was a bespoke design expressly commissioned to ensure it met our requirements for flexible work/study space specific to the course provision delivered at the campus. It’s now in full use and proving very popular with students and staff.

“The Barn provides learning spaces, social and flexible areas, a wireless environment, and reception services for the campus and the library. The university’s student support services are also located there to support all students, staff and visitors on campus, as well as the new Barn Café, which is integral to the space.

“We’re extremely pleased with the final look of the development and its operation,” she says.

The campus is a winning combination of location, history and modern design, and it has been shortlisted for a number of architectural awards. 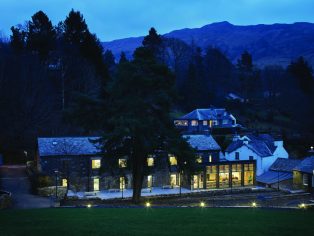 Windows boarded up before the project begins. © John McAslan + Partners

Above: The campus hub includes a café. © John McAslan + Partners 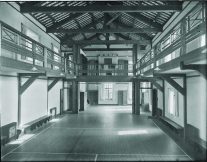 The bank barn in its days as a gym. © University of Cumbria 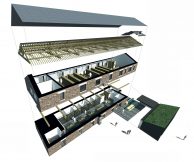 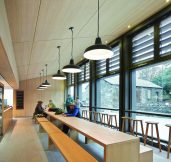 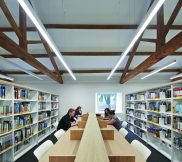