A primary school, a brand-new community and a brewery housed in a 14th century wool house have been named as three of the best new developments in the Solent.

That’s according to judges of the Solent Design Awards, the biennial event that aims to showcase developments that have made a difference to the places around them.

On 24th November the winners of this year’s competition were revealed at a glittering awards ceremony at Southampton Solent University’s new £30m Spark building.

The Residential Quality Place Award, sponsored by Barratt Homes and David Wilson Homes – Symonds Close in Winchester
Designed by T2 Architects, Symonds Close provides 12 new build houses for Winchester City Council’s New Homes Delivery Team and is the first new council-built stock for 25 years. The houses, built around a safe and overlooked play street and attractive landscaped communal space, achieve Code for Sustainable Homes Level five for energy use. Each dwelling meets Lifetime Homes standards and one of the two bedroom units has been adapted for its first tenants, a family with a disabled son.

The Quality Places Award – Westgate School in Winchester
Designed by Hampshire County Council Architects, this project took a redundant boarding house and creatively re-modelled and extended it to provide a new 420 place primary school, responding to increased demand across the city. The clever use of design has optimised the levels of both natural light, ventilation and provides greater flexibility and social cohesion. A new ‘school green’ at the heart of the campus serves both school and wider community.

The People’s Choice Award – The Dancing Man Brewery in Southampton
The project, submitted by Southampton City Council’s Historic Environment Group and designed by architects Knight Architectural Design, has transformed a 14th century wool house into a pub and restaurant with its own on-site brewery. The design respects all of the original fabric of the Grade I listed building while adding new fixtures and fittings, the majority of which made from recycled materials. The transformation of the wool house has led to a significant increase in footfall to the area and created not just a place to bring people together, but a platform for local artists to display their work.

The project received a huge 40 per cent of the votes, which were cast online by members of the public. More than 3,000 people took to their keyboards to vote this year, more than ever before.

Liz Kessler, one of the Solent Design Award judges, said:

“The quality of shortlist this year was fantastic, with very varied schemes; it was incredibly difficult to pick the winners. There have been some excellent examples of buildings making a positive contribution to creating a sense of place and making a real difference to the people using them, as well as the wider environment.

“I would love to see more integration with the street network and more high quality street and public realm schemes as these have such a huge impact on people’s quality of life, as was well demonstrated by the one shortlisted. Huge congratulations to all of the shortlisted entrants, who have played an important part in shaping the region for the future.”

Other local projects applauded on the night as finalists were:

“Initiatives such as the Solent Design Awards are so important in promoting the importance of placemaking. To construct a building is one thing but to create an environment that makes a real difference to the people and communities around it is a true skill.”

To find out more about this year’s awards visit www.solentdesignawards.org.uk 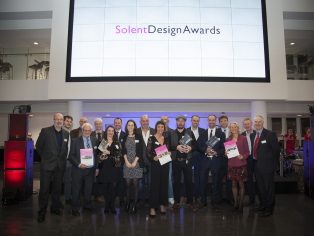