Local authorities and housing associations across England have been asked to carry out urgent safety checks on their buildings’ cladding, a Department for Communities and Local Government (DCLG) correspondence has revealed.

In the aftermath of the Grenfell Tower fire, Malanie Dawes CB, permanent secretary at DCLG, has written to social housing providers asking them to identify if “any panels used in new build or refurbishment are a particular type of cladding made of Aluminium Composite Material (ACM).”

While the police investigation into the tragedy is still on-going, it is suspected that the composite aluminium and polyester-coated panels used during the tower’s refurbishment may have contributed to the rapid spread of the blaze on 14 June.

In the correspondence released by the DCLG today (Monday 19 June), Dawes stressed that “ACM cladding is not of itself dangerous, but it is important that the right type is used.” Housing providers who find this type of cladding on their buildings have to test samples of it ‘at no cost’, while the ‘testing facility’ will also be made available to residential landlords.

Landlords are required to do the checks by the end of today  “or as soon as possible thereafter”, ensuring they:

The letter states landlords need to check if the core material of the ACM panels is of limited combustibility when such cladding is used on buildings more than 18 metres high.

DCLG also confirmed some of the displaced Grenfell Tower residents would be rehoused in Peter Taylor Associates’ luxury residential development Kensington Row in south Kensington where the Department acquired 68 flats. 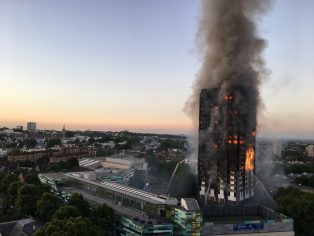