Over 150 people attended a special event to mark the completion of the building’s structure.

Located near Farringdon station in London, One New Street Square is a new 16-storey commercial development which Skanska is building for Land Securities.

The building, designed by Robin Partington Architects, will provide 275,000 ft² of office and ancillary space over ground, upper ground and 14 office floors and will achieve the BREEAM Excellent environmental standard.

The event at One New Street Square follows the successful completion and handover of the One and Two New Ludgate development in the City of London for Land Securities last year.

“I’m pleased to be celebrating this key milestone at One New Street Square. It demonstrates Skanska’s continued track record of success with commercial property in the City of London.

“It’s great that we are making a positive contribution to London’s economy through developments such as this. With its distinctive wedged-shaped sloping roofs, I think it will be an eye-catching addition to London’s skyline.”

“Today marks a major achievement for everyone involved at 1 New Street Square and we are delighted to be celebrating reaching this stage. The building has already been pre-let in its entirety to Deloitte and adds to their neighbouring occupations in 2 and 3 New Street Square and Hill House. We look forward to reaching practical completion in the summer.”

Work will complete later this year. 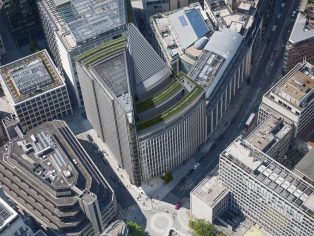