A multi-storey car park in Cambridge has joined private homes, further education facilities and artists’ studios on a list of sixteen projects shortlisted in the region by the RIBA (Royal Institute of British Architects) in this year’s RIBA East Awards 2015. Thirty-eight entries were received for buildings in the East of England this year.

The buildings that have been shortlisted are:

“We have seen a diverse range of entries this year and it’s really great to see clients pushing for good design across such a broad spectrum, from small art studios through to a towering multi-storey car park – the first we’ve seen being entered for an Award. All the architecture practices and their clients are to be congratulated for getting this far and I look forward to hearing the jury’s verdict next month.”

All shortlisted buildings will be assessed by a regional jury in March, with the winners of an RIBA East Award being announced during the evening of Thursday 16 April 2015 at a celebratory event at Robinson College, Cambridge. Regional winners will then go forward to be considered for a highly-coveted RIBA National Award in recognition of their architectural excellence, which will be announced in June. The shortlist for the RIBA Stirling Prize for the best building of the year will be drawn from the RIBA National Award-winning buildings later in the year. 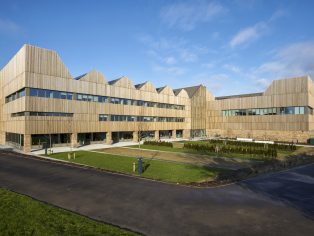