Sitting comfortably in the Hart of the community

GT+3 Architects is set to complete an ambitious project for a contemporary leisure centre which has to provide distinctive architecture as a community hub but also blend with its parkland surrounding. Steve Menary explores further.

In the current political environment, building on greenfield sites near swathes of open countryside can be a difficult proposition.

Yet that’s exactly what Hart District Council hopes to achieve in Fleet, Hampshire, where work is underway on a new leisure centre near a 24-hectare country park.

Located 40 miles south west of London near the M3, Fleet may tempt those looking to move within the commuter belt as it’s an hour from the capital. Another positive is that the town’s old leisure centre is currently being redeveloped into a new sports complex.

The £23m scheme is located next to Edenbrook, a major residential development by Berkeley Homes, and this context posed a significant design challenge.

“The client (Hart District Council) wanted something that was different from a ‘standard box’ but would stand out as it’s going to be at the centre of the community,” explained Richard Weaving, senior building manager on the project for main contractor Willmott Dixon.

The firm was recruited through the Scape framework and novated the architects, GT+3 (formerly GT Architects), onto their construction team, but the specification continued to be tweaked. In search of inspiration, the council’s procurement team even went on a fact-finding mission across the country before setting a brief.

“The client looked at leisure centres across the country to see what was good and bad,” adds Mr Weaving. “They had very particular ideas, from the types of tiles to the width of the corridor. There was a leisure centre in St Albans where the corridor was too narrow for people coming off the pitches.”

At the end of 2014, the first designs were unveiled and in September 2015, Willmott Dixon started construction work. Once completed in February 2017, the leisure complex will provide a wide range of facilities. These include three indoor swimming pools – a teaching, intermediate and a larger eight-lane pool with moveable floor – as well as a sports hall, wet changing area, a 120-station gym, sauna and steam rooms and grass and 3G pitches.

A major external design feature is the curved roof. GT+3 director Mark Gowridge said the architects had to “create a pavilion-type building in the park which sits well within the landscape setting, yet at the same time create an iconic building that delivers modern standard leisure facilities with great flexibility.”

“The building has been designed as three interlocking pavilions. The two sweeping curved roofs accommodate the pool hall and the sports hall and the fitness suite and climbing wall sits in between the two wings. The curved roofs frame this central space and help advertise it.”

“The pool hall and the sports hall are large box spaces and we wanted to curve the roof to slope and flow into the landscape and reduce the impact and feel of the building’s height. The copper colour of the roof helps to seamlessly blend the roof form into the contoured landscape and creates the iconic language to the building.”

The roof was designed to achieve a column-free environment through the specification of a standing seam design, which comprises a structural steel frame that has been manufactured and supplied by Condor Allslade.

The pool hall has a tied arch roof with aluminium perforated acoustic deck and a suspended timber ceiling. The ceiling is a Corogrid bar and bracket/acoustic deck system, which is similar to the Thermohalter system but slightly deeper in construction design and can offer clear spans of up to 9 m – making it ideal for a sports hall. The standing seam roof sheets are weathered copper and supplied by Rigi Systems, with the sheets sent through a curving machine to form the profile, seams  and curves.

An acoustic insulation slab was installed after the deck and top hats before the Corogrid bar and brackets. A vapour control system runs over the side of the roof lapping around the galvanised flashing and behind the cladding.

The roof’s “flowing” design created a challenge for the construction team in getting the levels correct to form the desired effect.

“If each ridge is more than 12 mm higher than the other layer, the roof won’t fit,” added Weaving. “We had to take a couple of sheets off the roof and adjust the steelwork.”

Internally, GT+3’s design specifies in situ concrete walls with precast staircases and terrace seating. Dry-lined partitions have been used with ceramic tiles and glazed screens. The client specified a timber ceiling and Hunter Douglas has supplied African Ayous, which will be one of the final elements of the fit-out as this light wood needs to acclimatise to the temperature in the pool area before being fitted.

Externally, brickwork was specified at lower ground level on the walls. Purple bricks were used up to three metres and Kawneer’s AA100 curtain walling and Rockwool were installed above. Render was used on the walls but not at low levels. Willmott Dixon changed this element of the design, fearing that low level render would be a target for vandals and instead opted for Trespa panelling. The construction team also switched the internal camera suppliers to Poolview. The changes were achieved without friction as the client, architect and contractor hold fortnightly meetings to go through any design changes.

An illuminated climbing wall at the front of the leisure centre is another key design feature, while there are three full-size football pitches with both grass and artificial surfaces supplied and installed by S&C Slatter.

Sustainability is also central and the project features a combined heat and power system using waste heat from the pool hall, photovoltaic panels on the roof and landscape planting to encourage diversity. With a seven-acre site bordering on fields, landscaping was particularly important to the project.

As part of the construction work, 20,000 m3 of spoil was stripped off the site early on by Willmott Dixon’s construction team, who used a cut-and-fill analysis to ensure none of this went to landfill. Instead, the levels were adjusted to accommodate the excavations. This made the landscape design particularly important.

Consultant Oobe is carrying out the landscape design work. This package will cost around £800,000 and include the planting of 4,800 trees and 50,000 shrubs around the site.

For GT+3, the project will symbolise the start of a new era, as when design work began on the project, the designers were known simply as GT Architects. In April 2016, the Nottingham practice merged with Tyneside-based +3 Architects to create GT+3 Architects and the newly formed practice will be credited with the Edenbrook design.

The quality of the design work evidenced on this project appears to have been noticed already – soon after the merger, GT+3 landed a commission to design another new leisure centre, this time at Horsham in West Sussex.

For the architects and Hart District Council, Edenbrook Leisure Centre should be a local landmark that is valued for many years to come.

“It’s definitely going to be a flagship for the area and for the operator it’s going to be one of their prime centres,”  vowed Steve Mirtle, GT+3’s senior architectural technologist on the project. 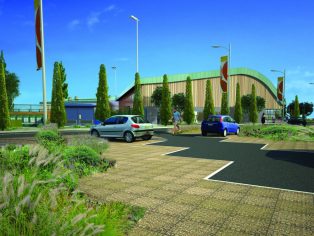 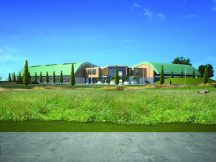 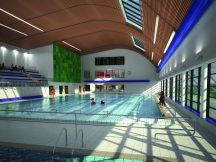 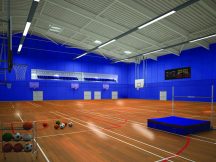 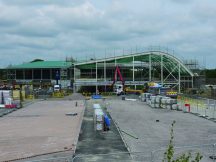