Town planning and the housing crisis have become key issues in UK policy, featuring daily in media headlines. Bank of England deputy governor Sir Jon Cunliffe told the BBC that the housing market poses the “biggest risk” to the UK economy, with “prices rising faster than people’s incomes” as a major threat. He echoed the warning in a report from the International Monetary Fund (IMF). His announcement came after the Nationwide Building Society reported that UK house prices had risen above their 2007 peak, with the average value of a UK property now £188,903 – over £400,000 in London for the first time.

What is the answer? Sir Peter Hall’s new book, Sociable Cities: The 21st-Century Reinvention of the Garden City, published by Routledge/Taylor & Francis, argues for the planned decentralisation of London. More planning, not less, is necessary to solve the crisis.

In 1998, Sir Peter Hall and Colin Ward (who died in 2010) wrote the first edition of Sociable Cities to celebrate the centenary of Ebenezer Howard’s To-Morrow: A Peaceful Path to Real Reform, which first proposed the idea of garden cities in 1898. Since the first edition of Sociable Cities was published, so much has changed that, as Hall puts it, “the sixteen years separating the two editions of this book seem almost like geological time. Revisiting the 1998 edition is like going back deep into ancient history.”

Today, Hall advocates for the resolution of Britain’s housing crisis by decentralising London and creating new city clusters in South East England. Meant to counteract overcrowding, garden cities incorporate open green spaces with housing, commercial and industrial sectors. These clusters, linked to London by high-speed railways, would be self-sufficient in their daily patterns of living and working. Hall maintains that the formation of sustainable garden cities could provide both a solution to Britain’s housing crisis and create a better living environment.

This book follows Routledge’s 2013 publication of Hall’s book, Good Cities, Better Lives: How Europe Discovered the Lost Art of Urbanism, to which Sociable Cities is designed as a companion. Together, the two books argue that increased city planning will improve the quality of living. These plans must be created with an eye towards Britain’s future and the kind of country it will be both within a few years and decades from now.

Every planner and serious student of policy-making will want to read Sociable Cities. Published when the political parties are preparing their policy manifestos, it is designed to make a major contribution to national debate. 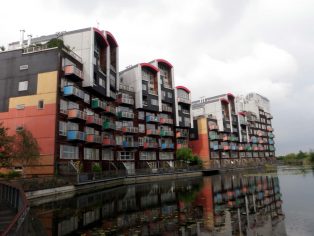