The shortlist for the prestigious 2014 RIBA Stirling Prize for the best new building has been announced today (Thursday 17 July). The six exceptional shortlisted buildings will now go head-to-head for architecture’s highest accolade, to be awarded by the Royal Institute of British Architects (RIBA) on 16 October 2014. The six buildings will be judged by the same criteria: their design excellence and their significance in the evolution of architecture and the built environment.

The shortlist for the 2014 RIBA Stirling Prize is:

Everyman Theatre, Liverpool by Haworth Tompkins
After nine years gestation, Liverpool has a brand new purpose-built theatre of outstanding quality. The selection and use of materials has created an exceptionally tactile building. This is a building that will age gracefully, continually enriched by the patina of daily use. It will both reassure and delight its loyal audience and those discovering this gem for the first time.

Library of Birmingham by Mecanoo
Three stacked boxes adorned with a glittering filigree screen are the signature of this landmark, which makes a bold and transformative addition to the city. With formal and informal spaces for reading, relaxing, playing and participating in the library’s programme of events, it has shaken the traditional perception of a library, turning it to a place where families and readers can spend a whole day learning and engaging.

London Aquatics Centre by Zaha Hadid Architects
This world-class building was a fitting backdrop for the 2012 Olympic Games. Inspired by the fluid geometry of water in motion, the undulating roof sweeps up from the ground like a wave to fold over the building and define two separate pools. It is very beautiful; sensual with a generosity of space. The pure and powerful form is conceptually flawless; it will be a favourite venue for Londoners for generations to come.

London Bridge Tower (The Shard) by Renzo Piano Building Workshop
1.2 million square feet of accommodation has been built on a small parcel of land directly next to one of London’s major transport hubs. To make a tower on such a tight site a thing of great beauty is a rare achievement. Six uses occupy multiple floors: health clinic, offices, restaurants, hotel, residential apartments and public viewing gallery; to create a ‘vertical village’. The building is omnipresent in London and has added immeasurably to the city.

London School of Economics – Saw Swee Hock Student Centre by O’Donnell + Tuomey Architects
This is an object lesson in creating a surprising and startlingly original building on a difficult urban site. Every angled facet responds to the rights of light of its neighbours. Formed as a continuous spiral rising upwards, the outer brick walls slope and twist, gouged with cuts and cracks that give light and form. The floors take up complex shapes, yet all the spaces feel natural and functional. This is a building showing a high degree of craftsmanship.

Manchester School of Art by Feilden Clegg Bradley Studios
The major refurbishment of a 1960s tower and the creation of a new building with open studios and workshops has been executed with great skill and innovation. Design excellence has been coupled with a visionary brief calling for staff and students to break traditional course divisions and work across disciplines. This is a building where the exploration of design and creativity will flourish.

The London School of Economics and Manchester School of Art illustrate the good health of the British higher education building projects. Both buildings serve the students brilliantly. The LSE building has created a pocket of visual drama and eccentricity in contrast to the grey education quarter in which it sits; the Manchester School of Art is a modern student factory – a hot house of creativity with a level of interaction between students of different disciplines never before achieved.

Both the Library of Birmingham and Liverpool’s Everyman Theatre have expertly replaced exisiting buildings, in turn winning over a community (which may or may not be resistant to change) to become a destination that entices that same community in. They are excellent examples of creating spaces worthy of immense civic pride.

The Shard and the London Aquatics Centre are great lessons in how to create a poetic relationship with the landscape – their shared ambition is to enhance the skyline in a picturesque way. The Aquatics Centre delivers the most sensuous architecture experience; with The Shard, the single most significant step forward on the London skyline since St Paul’s, partly so visible because of its beauty.

Speaking about the shortlist Stephen Hodder, RIBA President and the first ever winner of the RIBA Stirling Prize (1996), said:

“The RIBA Stirling Prize is awarded to the building that has made the biggest contribution to the evolution of architecture in a given year.

“Every one of the six shortlisted buildings shows what great public architecture can do: it can transcend mere construction to something quite poetic. The shortlist comprises no ordinary new swimming pool, office block, theatre, library or university – they are beautiful, inspiring and transformative new buildings that their communities can relish and be proud of.

“This RIBA Stirling Prize shortlist is sending out the clear message that great buildings don’t only need great architects and clients but they need the patronage of the community they have been designed to serve if they are to be truly successful.

“The shortlisted buildings are all major new additions to an already dense urban fabric in the cities they serve. However, they are remarkably crafted buildings and the closer you look at their detail, both internally and externally, and their materiality, the more impressive they become. The RIBA Stirling Prize judges have the most unenviable task in having to pick one winner.”

The winner of the 2014 RIBA Stirling Prize will be announced on the evening of Thursday 16 October at the Royal Institute of British Architects (RIBA) in London. For further information on the event www.architecture.com/StirlingPrize 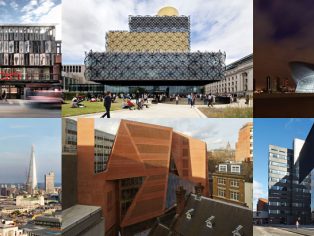