Against a backdrop of a record number of entries from facade practices and partnerships located around the world, the winners of the 2016 Facade competition organised by the Society of Facade Engineering have been announced.

The results were kept a closely guarded secret and announced at the annual ‘Glass Supper’ attended by some of the worlds leading facade engineers and designers, thus adding greater tension as the evening wore on towards the outcome.

With the honours presented by Chris Macey, Chair of the Society of Facade Engineering Judging Panel, the winner of the Facade of the Year in the Refurbishment category went to Arup for 10 New Burlington Street, London. Winner of the Outstanding Façade Innovation went to TU Delft & ABT Consulting Engineers for the Crystal Houses, Amsterdam.

The standards overall were extraordinary said the judges but the two outright Winners were ‘quite exceptional’. Of Arup’s entry for 10 New Burlington Street, for the judges Chris Macey commented: “London is the refurbishment capital of the world currently and Arup appear to reign supreme here with this project itself a trophy to the skills and commitment of the team behind it. The tight curved highly glazed unitised facade of 10 New Burlington Street has been completed to the highest quality standards.”

Commenting on Crystal Houses, submitted by TU Delft and ABT Consulting Engineers, Chris commented: “This is a beautifully crafted example of a small but precisely executed commercial building. The judges were impressed by the attention to detail and thorough research and engineering that went into the project.”

Graham Hackley, coordinator of the competition on behalf of the SFE added: “This entry was the unanimous decision of all of the judges and proof that winners of this competition do not have to be large scale. We are delighted also that much of the credit for this project goes to two post graduate researchers Faidra Oikonomopoulou and Telesilla Bristogianni, two young and inspired designers who beat the big guys.”

Summarising the importance of the competition Chris Macey said: “The discipline of facade engineering embraces disciplines and technology such as material sciences, structural engineering, materials, manufacturing technology, mathematics, corrosion science, CFD analysis, logistics and many others.

“The SFE competition provides the only real opportunity for those with this extraordinary skill-set and who create great examples of facades excellence, to gain proper recognition by their peers and in the wider architectural community. With this year’s competition I believe that once again we have achieved just that. 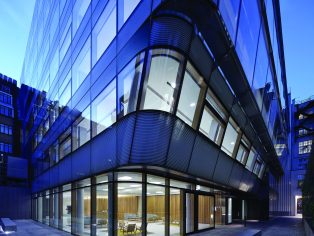