Voting has begun in Westminster’s search for the city’s best building of the last decade, recognising the capital’s cutting-edge architecture with a design excellence award.

Westminster is home to some of the country’s most famous buildings and landmarks. To recognise, celebrate and promote architectural excellence across the city, Westminster City Council (WCC) has launched the first People’s Choice Award.

The award has been launched as part of a broader campaign to engage the public in a debate about what makes a great building, recognising cutting edge, high quality designs from the past 10 years.

An expert panel comprising of experienced architects, developers, councillors and planners has shortlisted 12 designs and now those who live, work and visit the city can vote for their favourite modern building.

The panel considered each building’s use of materials, its purpose and impact on the space around it when making the final selection.

The shortlist is made up of buildings which serve all parts of the community with housing, office, retail, education and gallery space all put forward for the public to vote on.

The award is being led by Councillor Robert Davis MBE DL, Deputy Leader of Westminster City Council. He said:

“From sleek glass art galleries to outstanding housing developments, each of these buildings finds inventive solutions to unique architectural challenges.

“Brilliant architectural design should be recognised for all the fantastic benefits it can have in terms of health and wellbeing, sustainability, and the simple pleasure we all take from having such striking buildings lining our routes home and to work.

“The best people to ask about the impact these buildings have are those who see them day in, day out, and so I am delighted that we have been able to engage the public in a debate about what makes a great building and to promote design excellence,” explained Cllr Davis.

The Serpentine Sackler Gallery opened in 2013, welcoming visitors from around the world to its many programmes exploring contemporary creativity.

Built in 1805 in London’s Kensington Gardens as a gunpowder store during the Napoleonic Wars, the Magazine building has been renovated and repurposed into the Serpentine Sackler Gallery – one of London’s most popular spaces for art.

A light and transparent extension complements the solidity of the original neo-classical building.

Using tensile architectural fabric supported by sculptural columns crafted in steel, Zaha Hadid Architects created a permanent ‘pavilion in the park’ for the gallery’s new public event space and Magazine restaurant, described by AA Gill in The Sunday Times as “one of the most inspiringly beautiful dining rooms in London, in Europe, in the world… just breathtaking.”

Championing new ideas in contemporary art for almost half a century, the Serpentine Galleries have presented pioneering exhibitions of more than 2,000 artists, showing a wide range of work from emerging practitioners to the most internationally recognised artists and architects of our time, including Zaha Hadid herself. 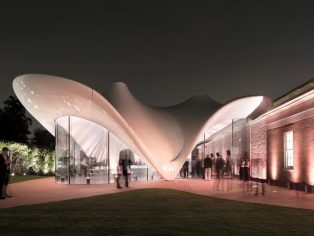