Seeking a radical transformation in Chelsea

The museum was established by Royal Charter in 1960 and moved to its current site in 1971. The site is only a 10 minute walk from Sloane Square and currently attracts around 270,000 visitors a year. BDP has drawn up a design that aims to transform the museum.

“The creative adaptation of this major UK museum presents a wonderful opportunity to reorder the building, re-present the collections and communicate to a wider audience the significance of the Army Story,” says BDP director Tim Leach.

The exterior of the existing building was closed in character and failed to provide a welcoming first impression to the visiting public. Inside, the building was cramped and congested, and struggled to meet the demands of the museum’s growing audiences. The practice’s designs have built on an outline masterplan drawn up by Event Communications, the exhibition designers who are currently reworking the museum displays. This masterplan was used to make the round one application to the Heritage Lottery Fund (HLF) to help bankroll the £23 million project in 2011. Last year, following a successful round two application, the HLF agreed to put £11.5 million towards the redevelopment. The challenge for BDP has been to develop a design that provides a dramatic enhancement of the museum experience for visitors, but is also sympathetic to the local context, in both character and scale of development. Created from designs drawn up in the 1960s by William Holford & Partners, the existing building is designed in a brutalist style that is at odds with the neighbouring Royal Hospital Chelsea, home to the Chelsea pensioners. The Grade II listed Soane Stables, designed by Sir John Soane, form the eastern boundary to the museum site. On the opposite side is St Wilfrid’s care home, a 1970s building that makes reference to Holford’s design through the use of a similarly pink hued brick. The National Army Museum has been previously extended in 1978-83 by Carl Fisher and Partners. The structure of the first phase of this purpose-built museum building was carefully designed by Holford to allow for ease of future expansion. When BDP began working on the design, a number of sketch proposals were considered that explored the introduction of a new architectural language that differed from both the existing brutalist museum building and the listed Soane Stables. The final scheme seeks to refresh and modernise the existing facades, but takes a conservation-led approach in doing so. This approach then extends to the appearance and detailing of the new side extension.

“The client was keen to find a way to soften the brutalist language of the existing building, without introducing a further architectural language that was very different to the stables and the wider historic context. They wanted a more sensitive approach to the character of the existing building and the local surroundings,” explains BDP’s project architect Verity Rowsell.

The brutalist museum was not welcoming in part because the main entrance was located to one side of the museum and set back over 30m from the street. The facade was also constructed with a concrete trellis in front of the glazing that acted as a simple baffling technique to limit the amount of light that damage that sunlight can inflict on some of the museum artefacts, in particular uniforms, there was little natural light in the old museum apart from two roof-lights to the main atrium. All of this combined to provide a disorientating experience for visitors and a radical transformation was needed.

“It was quite a dark museum,” says BDPs’ project engineer Steve Edge.

“There was no atrium as such. There was a ground floor cafe immediately at the entrance and the circulation started from there.”

BDP is working as a multi-disciplinary consultant on the project, including providing structural engineering advice.

“There has been quite a dramatic structural intervention to realise the design,” adds Ms Rowsell. BDP’s design team came up with a solution focussing on improving accessibility to both the building and the collections.

“The building wasn’t conducive to a positive visitor experience and some visitors said they couldn’t even find the entrance,” says Ms Rowsell.

“We have opened up the front of the facade at street level and there will now be large amounts of glazing, one and half storeys high, and a new main entrance and large foyer directly off the street. We have also organised it so that public facilities, such as the new cafe, are conveniently located on the ground floor and flooded with natural light.”

Alongside opening up the facade and the creation of that, the three key areas that had to be addressed were opening up the front of the building with glazing, creating a new level entrance, BDP’s scheme introduces a new central atrium that runs from the front to the rear of the building. The atrium is staggered across floors to create a dynamic space that opens up vistas into and through the depth of the building. As part of their approach, BDP carried out light sensitivity studies to assess how natural light could be introduced, while also ensuring that the light sensitive artefacts are not over-exposed. The existing building occupies 9,500 sq m of space and a further 500 sq m will be provided by the new two- storey extension. The new project will deliver seven separate galleries. There will be 2,200 sq m of exhibition space across six permanent galleries plus a new 500 sq m temporary exhibition area. The visitor experience will begin with an introductory area, and then lead into the Soldier Gallery, the Army Gallery and the Society Gallery, which will include a corner window allowing visitors to connect the gallery content with the views across military Chelsea. Other permanent exhibition spaces will be the Discovery Gallery at Lower Ground floor and the Battle Gallery, which also includes a smaller corner window to help provide some orientation for visitors. The public areas of the building are arranged across the lower ground, ground and first floor. Each floor of the existing building is divided into two half storeys, all of which will be served by a pair of new through-lifts ensuring inclusive access for all. The old central core was a complicated series of stairs and ramps.

“There was absolutely no sense of the outside,” adds Ms Rowsell. “At the top there were some roof lights but the rest of the light was artificial.”

BDP has replaced these roof lights while completely opening up the centre of the museum space. As a result, the museum is hoping this new space will dramatically improve circulation and orientation, while also providing a flexible series of spaces to support a host of public and corporate hire events. In addition, a series of dedicated learning spaces that front the base of the atrium at Lower Ground floor will support a growing programme of educational activities.

Ms Rowsell says: “There will be more dedicated facilities for schools and learning groups, which the old museum never had. The educational programme at the museum is already very successful and continues to grow.”

Externally, BDP specified a handmade grey brick with a pinkish hue, which is a careful match for the existing brickwork. The exterior of the building also features insulated render to help improve the thermal performance of the redeveloped building. Glazing framing will be articulated by pale gold cover caps and a new public forecourt will be created, paved in natural Yorkstone. The construction work on the £23 million project is being carried out by the British division of Northern Irish firm Gilbert Ash. Working on a tight site that means just-in-time deliveries are essential, Gilbert Ash has gutted the entire building. Gilbert Ash will also refit all of the mechanical and electrical work, as part of a shell and core build that is expected to cost around £11 million. The fit-out part of the project has been awarded as a separate package that is valued at around £5 million and that work is due to start in July next year. In the interim period, many of the museum’s artefacts have been placed into storage in Stevenage, and some have been loaned elsewhere. The museum is also delivering a diverse outreach programme of travelling exhibitions, along with informal and formal learning sessions, which all supported last year’s commemorations and the bicentenary of the Battle of Waterloo. The entire collection of artefacts will return to Chelsea next year and when the new museum opens, the target is to raise visitor levels to more than 400,000 people a year.

“I am confident that we will produce a world-class museum development, which will deliver a fresh, informative and exciting visitor experience for all.”

With a design that aims to actually entice in visitors rather than leave them disorientated, BDP and Gilbert Ash are also equally confident of delivering that experience. 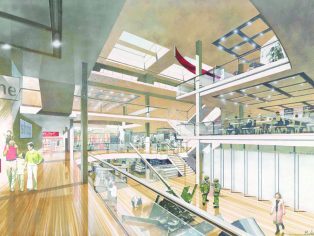