Planning consultancy Turley has secured planning permission from Liverpool City Council for the comprehensive redevelopment of the Cains Brewery complex. The hybrid application was approved by Members of the Liverpool City Council’s Planning Committee in November 2013 and was subsequently referred to the Secretary of State, who gave the scheme the green light on 20 January 2014.

The scheme, called ‘Brewery Village, Liverpool’, has arisen following the decision by Cains to bring to an end the large-scale production of own-label beers for supermarkets and to concentrate on the production of their own craft beers and lagers which are sold in the UK and exported to countries including the USA, Sweden, Italy, China and Taiwan.

The Brewery Village scheme comprises the conversion and extension of the grade II listed brewery building for a range of uses including:

Outline permission has also been granted for:

“We are delighted with this decision. It opens the way for a major new tourism and leisure destination in Liverpool, providing many new jobs. It will be a real asset for the city.”

Cains Brewery is currently seeking partners and operators for the cinema, hotel and supermarket to help take the scheme forward. The first phase of Brewery Village is expected to be completed by summer 2016. 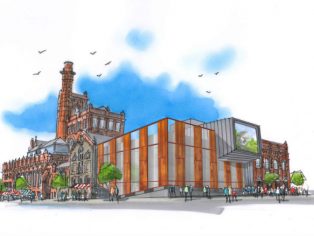