The new rooftop space, surrounded by pools filled with aquatic plants on every side and featuring over 800 tropical trees and plants, extends the work of Selgascano on the original Spitalfields building, which opened in November 2014.

This new rooftop space has five private studios for large teams of up to 150 people (each with their own pool-filled outdoor terraces), as well as a rooftop bar, cultural venue and a public rooftop terrace with stunning views of East London.  The ceiling of the large studios is covered with over 10,000 colourful felt hats, which increase the surface area and provide noise insulation to ensure a tranquil working environment.

With the addition of this new rooftop space, Second Home’s Spitalfields location has grown to 65,000 sq ft – housing over 200 creative companies and organisations, including Kickstarter, Help Refugees, Artsy and Bulb.

Since Second Home opened its doors in November 2014, companies based there have created jobs at a rate 10 times faster than the national average – and every one of the five large new rooftop studios has been taken by teams that have grown in the rest of the building.

“Companies based at Second Home grow 10 times faster than the national average, which is why we’ve opened this beautiful rooftop space so we can support them from startup all the way through to being a major business with 150 employees. By harnessing aspects of nature – like the ponds and 800 plants – SelgasCano have created a place where teams can be happier, more creative and more productive, which is what Second Home is all about.”

“What’s so brilliant about SelgasCano’s designs is that everything has a purpose – like the way the felt hats increase the surface area of the ceiling and create a tranquil working environment for larger teams. We’re thrilled to have a such a close working relationship with our architects – it’s a truly creative partnership, and every project we do together just gets better and better.” 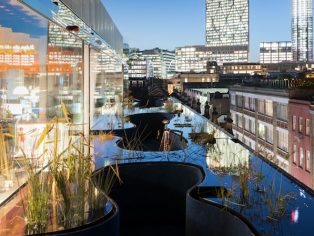