The Governor General’s Medal in Architecture awarded by the Royal Architectural Institute of Canada (RAIC) and the Canada Council for the Arts celebrates outstanding architectural design in Canada.

“This outstanding new civic building is a community gathering place that responds to the diversity of its users, accommodating many more activities than the traditional library. This 21st century facility is topped by the Halifax Living Room: an inviting, light, and playful public space with views across Halifax as far as the harbour.

“Other spaces provide for learning, reading, exercising, studying, hanging out, and playing. The reception area’s generous atrium with its beautiful stairway is the hub connecting the functions and users. The jury commends the process of early user engagement that led to the design, and the public’s embrace of the building is a testament to its value.”

The new Halifax Central Library, created in partnership with local studio Fowler Bauld & Mitchell, is said to be one the most significant public building to be built in Halifax in a generation.

The library stands as a reflection of the diversity of the community and the modern life within the region as a whole, and as a flagship for all 14 branch libraries servicing the whole municipality.

SHL explained that every stage of the architectural design process was carried out through extensive public consultations leading to a sustainable design and an engaged community. 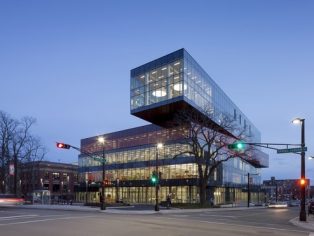 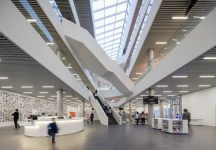