The MediaCity waterfront complex in Salford, Greater Manchester can double its size if a planned expansion led by Chapman Taylor gets the go ahead.

The scheme, if approved, will feature up to 10 new buildings along with a new 17-storey office tower and a multi-storey car park.

This will be the second stage of the project after the first one was completed in 2010 and houses 250 businesses including the BBC.

Chapmen Taylor Director Tim Partington said the massive scheme would help “boost the Northern Powerhouse,” adding that “phase two of MediaCity UK will bring a new residential community supported by high-quality public realm, leisure, and retail facilities, ensuring that the development is a sustainable urban neighbourhood and an exemplar for the 21st century.”

As well as the new homes, the plans also feature a multi-story “crystalline” office tower designed by Sheppard Robson.

Describing the design of the 35,000-square-meter block, a spokesman for the practice said:

“The building’s distinctive shape has been designed to negotiate its complex urban setting, with the crystalline form – which changes depending on the angle it’s viewed from – creating varying sizes of flexible floor plate.”

AHR Architects is working on two waterside apartment blocks with views over the Manchester Ship Canal. The first of these, The Lightbox, is due to start construction in early 2017 subject to planning. 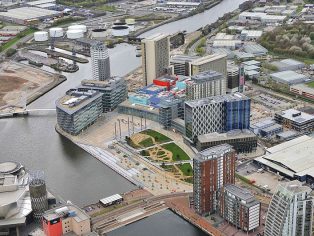