Russells to build UK’s biggest motel one, designed by Hodder and Partners

Construction is set to start on the UK’s biggest Motel One. Main contractor Russells Construction has been appointed by developer Livia to deliver the £25.5million project, which is located in Manchester’s Piccadilly area.

The 330-bedroom hotel will be 14-storeys high fronting London Road, and seven storeys on the Whitworth Street side. The ground floor of the 105,000 sq ft scheme will include hotel reception, restaurant and bar. The 20-month build programme, to BREEAM Very Good standard, should see the hotel open in the summer of 2015.

Designed by Manchester architect Hodder and Partners, the façade will comprise large floor-to-ceiling glazed panels for each bedroom, and the exterior will be finished in a stone coloured smoothed concrete.

“The Manchester Motel One will be our largest hotel scheme to date and follows the successful delivery of a number of developments across the country. We’ve established a reputation not only for delivery of hotel schemes, but also as experts in dealing with tight sites in constrained city centre locations. Our major projects team has developed a methodology and a number of supplier partnerships which create genuine cost and programme savings for our clients.”

Russells is currently preparing the site and completing the demolition of the existing buildings prior to construction. The innovative technique the team developed for a nearby hotel on Dale Street, will again be employed to increase the speed of construction and improve logistics on the constrained site, which is bound by two main roads. Engineer Capita Symonds and mechanical and electrical contractor Vitel have also been appointed to the scheme.

“We’re pleased to be welcoming Motel One to Manchester and we’re glad to have local contractors in Russells Construction and local architects in Hodder and Partners working on the scheme. We were looking for a contractor with a proven track record in city centre construction and hotel development, and in Russells we have found both.

“We are also grateful for all the support we have received from the city council to allow this project to proceed so efficiently. This is a new offering in luxury budget accommodation and we look forward to completing the scheme in 2015.”

The scheme is being forward funded after LaSalle Investment Management acquired the investment on behalf of an undisclosed pension fund in a £25.5million deal. 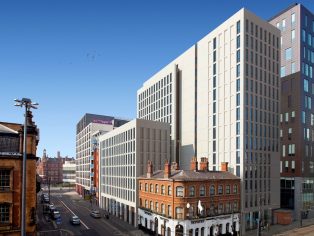