It is always satisfying to see a tried and tested traditional material finding modern uses. Rolled Lead Sheet has been around for hundreds of years, and it has been used just as much for its aesthetic as well as practical uses.

With its admirably long life span – no problem specifying for a 60-year life or more – it is also an impressive material with great malleability that can wrap itself around many buildings in a way that more rigid modern products cannot.

Add to this British Standard Rolled Lead Sheet’s green credentials – a BRE Green Guide rating of A+ and A in vertical cladding and roofing applications – and it appears a much more contemporary building product.

It also has the aesthetic qualities to bridge the gap between old and new rather effectively.

In the seaside town of Great Yarmouth, what was once one of the finest Baroque churches in the country, modelled on St Clement Danes by Sir Christopher Wren, fell into disrepair in the 1970s. It lasted as a theatre until 2006 but was then closed.

The building was rescued, in part with funding from the Heritage Lottery Fund. What exists today is a masterful blend of the restoration of the old with the new, with the Grade l listed Chapel restored, repaired and redeveloped to provide a flexible new performing arts centre and community space. Adjacent to it, a new pavilion building accommodates the front- of-house activities and service functions that could not be accommodated within the church. Between them, St George’s Plain serves as an external foyer and performance space.

Hopkins Architects began work in 2009, with the project completed in 2013. The new pavilion provides a wonderful echo to the old Chapel with lead central in providing a link between the two buildings.

As well as echoing the same brickwork, the pavilion’s roof is finished in the same Rolled Lead Sheet as the beautifully restored theatre in the Chapel. The rounded ends of the new building joyfully reflecting the rounded portions of the old Chapel.

Norfolk Sheet Lead was responsible for the installation on the build, using Code 6 lead to replace a defective copper roof on the main building (which was not original) and using the same grade on the new pavilion. The roof on the pavilion also has a ridge vent detail in the leadwork to air the timber structure beneath.

The reworked public space around both buildings provides an oasis for the public with traffic-calming creating an effective public space.

Rolled Lead Sheet has played a key role for many centuries and it had lasted well on The London Oratory, a distinctive London landmark in South Kensington. This neo-classical Roman Catholic Church and a Grade II listed building located on Brompton Road was constructed in the late nineteenth century.

It boasts some fabulous examples of Italian architecture designed by Herbert Gribble, with perhaps the most striking feature externally being the large Baroque dome. The leadwork on the dome, originally installed in 1895, performed excellently for well in excess of 100 years, with only minimal maintenance being required in the meantime. This was yet another fantastic example of the longevity and quality of rolled lead sheet.

However, after some 117 years it was decided that a major refurbishment of the leadwork on the dome was necessary. The rolled lead sheet was finally showing signs of fixing fatigue and crystallisation, with minor signs of underside corrosion, and so the decision was made for renewal of the leadwork, which was undertaken by Martin (UK) Roofing Systems.

This was a complex job, which included the use of extensive scaffolding and ensuring each section was renewed to the same specification as that it was replacing. Using Code 6 on the ribs and Code 7 on the main body of the dome, approximately 57 tonnes of British Standard Rolled Lead Sheet was installed. Although ventilation was successfully incorporated into the structure at the time of original installation, as indicated by the absence of underside corrosion for over a hundred years, additional high-level ventilation was introduced within the ornate head of the lantern.

With the assurance of having had British Standard Rolled Lead Sheet fitted by award winning leadworkers, the London Oratory can be confident that the leadwork will last at least another 100 years before requiring further attention and so will leave the building in good shape for future generations.

Support for the future

These are just two examples of Rolled Lead Sheet playing a starring role in some of this country’s most stunning architecture – from centuries old to the new, blending successfully with a modern approach.

The LSA also provides technical advice to architects and specifiers, to find out more about how we support the construction industry and can help you visit www.leadsheet.co.uk. 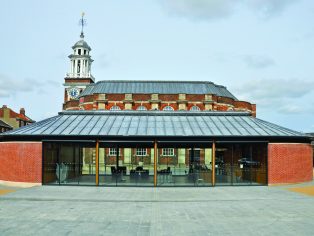