An innovative star-shaped school at Fredrikshavn in Denmark is using precision perforated steel panels from RMIG, to create giant graphic images depicting key landmarks from across the world as part of a unique cladding and facade solution at the new North Star School.

Designed by architects Arkinord A/S and Arkitema K/S, with the picture perforations developed by Art-Spot Design, the school provides primary, junior and secondary education for approximately 1,200 pupils and was created by combining the facilities of three existing schools into a single new 14,000m2 building.

By using a two-storey five-pointed star design, all the classrooms have access to natural light and ventilation, to create a comfortable working environment that is conducive to education as well as creating a spirit of adventure, which is reflected in the building’s design and the perforated facade from RMIG.

Solar shading and natural ventilation are among a range of energy saving and environmentally friendly technologies incorporated within the building’s design, which includes a 750 m2 roof mounted photo-voltaic array. These various techniques have combined to give the building a Danish Building Code low energy class 2020, which approximates to a LEED gold rating equivalent.

The flat wall at the end of each arm in the school’s five-pointed star design incorporates an individual complex graphic design manufactured by RMIG using its proprietary ImagePerf technology that allows thousands of different sized precision perforations to be made and create graphic images from artwork, drawings and even photographs.

RMIG worked closely with the two architecture firms, Arkinord and Arkitema, and Art-Spot Design to convert the concepts into finished perforated panels manufactured from 2.0mm thick hot dip galvanized steel, with each perforated graphic representing a scene inspired by the compass direction of each arm of the star. For the western arm, the USA and UK are represented, while views of Scandinavia, Africa, the Middle East and the North Pole are conveyed in the other designs.

As each individual image covers an area of approximately 70 to 80 m2 on the end of each of the building’s arms, RMIG produced the finished graphics across a series of smaller panels, which were assembled on site to an installation template provided by RMIG to create the final result.

“North Star is an inspired design that is not only creative, but also influenced heavily by the needs of the pupils and the desire to construct a building that provides an ideal learning environment.”

“Part of this creative approach that is evident throughout the building, is the use of the five large perforated graphic designs to depict scenes from around the globe, which the architects needed producing in the same galvanized steel material as the exterior facade.

“As we have an immense amount of experience in creating picture perforations, which are used in a range of major projects worldwide, we were able to provide the architectural team with a precision solution. We not only helped translate their concepts into a production programme, but also manufactured the perforated designs and supplied them together with other elements on the project.”

The North Star School project was handled under RMIG’s dedicated architectural and construction sector support programme, City-Emotion, which assists architects and contractors to realise their urban design concepts and convert them into real solutions for buildings. Further information on City Emotion, the RMIG Group, its product groups, markets served and the manufacturing solutions it provides can be obtained by visiting www.city-emotion.com. 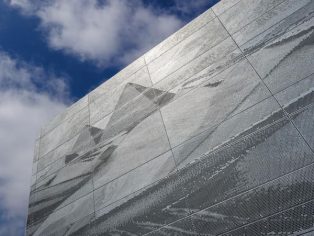