A new £30million education development in Bergen, Norway is using more than 2000m2 of aluminium cladding from RMIG, which incorporates thousands of precision perforations to create a series of distinctive images on the building’s exterior.

Developed on a site previously owned by Norwegian State Railways, the new Bergen University College building on Kronstad Campus brings together five separate listed buildings into a single educational facility that will house around 7,000 students when it opens in late 2014.

The overall architecture and facilities incorporated within this 51,000 m2 project were created jointly by HLM Arkitekter and Leigland Bygg in Norway and Cubo Arkitekter in Denmark. The perforated aluminium facade was designed by Norwegian artist and Bergen University College Masters graduate, Anne-Gry Løland, who won the commission against three other artists.

The patterns and images used for the facade follow a ‘knowledge and education’ design theme, which merge figures and detailed drawings in a layered effect to create contrast while also providing a dynamic effect as lighting changes during the day.

To ensure the artist’s creative designs were captured accurately, RMIG used a unique scanning and mapping process to convert the artwork into 32 different perforation patterns that could be programmed and manufactured to the high precision standards demanded by Anne-Gry Løland.

As with all RMIG architectural projects, the production process was managed under the company’s ‘City-Emotion’ programme, which was created specifically to support architects and contractors who require high quality perforated and expanded metal products. All RMIG products are manufactured using the latest innovative technologies and can form a key part of the most exciting building projects.

The final panels, which measured 3584 mm x 798 mm, were manufactured from 3mm thick untreated aluminium sheets and used circular perforations, ranging from 9 mm to 13 mm in diameter, to create the virtually photographic quality images that provide the building with its unique exterior.

A further aspect of the perforated pattern design incorporated by the artist was to create a changing perspective as the facade is viewed at different distances. From a distance the perforations combine to form full graphic images, while when viewed more closely, the perforations form more random abstract patterns.

“This is an immensely important building as it brings together different educational functions under one major structure, which provides students and researchers with outstanding facilities. To reflect this, the project has been given the name locally of ‘Kobling’, which means ‘linking’ or ‘bringing together’, as it combines three different branches of study covering engineering, nursing and teaching, which will move to the new building when it opens.”

“The link is also relevant in terms of the project’s architecture, which re-purposes four existing Norwegian railway buildings alongside a new nine-story structure, while also linking Bergen with the suburb of Kronstad.”

RMIG has 13 offices in 11 countries and provides precision engineered perforated solutions across the globe to meet the needs of a range of business sectors and industry groups. Further information on the RMIG Group, its product groups, markets served and the manufacturing solutions it provides can be obtained by visiting www.rmig.com 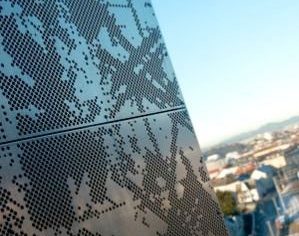