When architect Francesco Buzzi persuaded his client that he could design something special in a suburb of the Swiss city of Locarno, the remarkable result was something that is now winning international praise.

The focus of the plaudits is the robot-built brick cladding that is woven in an interlaced pattern around each of three six-storey buildings at the mixed residential and commercial development of Residenza Le Stelle.

Designed by Buzzi’s company, Buzzi Studio Di Architettura, the brick facade resembles a patchwork of pixels – the minute component blocks of colour in an electronic image that together form a whole picture.

But this cladding system is not designed to sit flat against the exterior of the buildings – in fact, it forms a wave-like facade as the brick panels bend inward and outwards. Even more unusually, in some places this wave partially covers the buildings’ windows and loggias.

The effect is probably best summed up by the Buzzi Studio team, who describe it as being like “a curtain swelling and contracting in the breeze”.

The story of how this unusual building envelope design came into being begins with Buzzi’s intimate knowledge of Solduno, the Locarno neighbourhood it now graces.

“I grew up nearby and so know the area well. The playful design and quality of the 60s-built structures I knew when I was younger have now largely been replaced by rather dull buildings – a great loss to the neighbourhood.”

So Buzzi was determined the design of the new Solduno buildings for which he was responsible would certainly not be dull. Buzzi Studio’s aim was to design something modern, yet still “merging with the fabric of the neighbourhood”. Fortunately, says Buzzi, the client shared that ambition and was “open to new ideas.”

It turns out that practicality was one driving force for the innovative brick cladding that was eventually developed. Buzzi explains: “The birth of these buildings was very long, between five to seven years for various different reasons, and the requirements and specifications were changing. We needed to find a solution to deal with these unpredictable changes.”

Inspiration for a wave-like brick facade

“We decided to make the changing requirements a quality. That’s when we came up with the idea of a wave-like brick facade. Normally, when building with brick you need to be very precise with your measurements but this would mean the coincidence between the brick and openings for windows didn’t have to be exact.”

Inspiration also came from the Casa Beretta building adjacent to Residenza Le Stelle – a structure designed by influential local architect Rino Tami. “He was a pioneer of modern architecture and this building, from 1964, uses brick so we wanted to connect our building with it.”

A third motivation, says Buzzi, was “to employ techniques that were very much 21st century”. “We knew of some research being done in Zurich by a company called ROB Technologies that was about enabling an architect to design a facade using 3D software. We felt this technique would say we are part of the present epoch. But then every architect in history wants to use the latest techniques.”

So, how did the cladding system actually come together? After the brick facades had been designed, the individual sand-coloured bricks – created by Swiss manufacturer Keller using Jura clay – were carefully glued together by robots to form panels.

The panels were then fixed to the buildings onsite using stainless steel brackets and hooks. The final part of the process was to weave the panels together

by the manual insertion of just a few connective junction bricks. Behind the cladding sit weatherproofing and insulating materials plus a reinforced concrete frame.

The positioning of holes in the facade so that they don’t exactly match the position of windows and loggias is very much deliberate. Says  Buzzi: “We wanted it to be very clear the brick was perceived as cladding, not a brick wall. But we also liked the idea that rather than just something only superimposed on the exterior of the structure it can be perceived from the interior too – that’s why the bricks are sometimes partially or almost entirely in front of windows.”

Returning to descriptions of the cladding that make comparisons with fabric, the Buzzi Studio team point out that the way the bricks have been cut to accommodate the openings for windows and loggias produces a final appearance with “textile ornamental qualities, like fraying fabric.”

The positions of the three buildings that make up this development are also carefully thought out to respond to their location. Filling the full width of the site, there’s a block that faces onto Via Bartolomeo Varenna, a busy street with heavy traffic. Behind this are two freestanding towers that face sloping ground down to the Maggia river and offer views of the surrounding mountains.

Buzzi explains that the landscaped spaces between the buildings help to visually connect the complex with the surrounding scenery, their Rino Tami-designed neighbour and the enclosed gardens of other adjacent buildings.

Changeability outside & inside too

Apartments in the two river-facing towers take up a full floor each, but have slightly different floor plans and window arrangements. Buzzi says: “We drew on the idea popularised in Milan and known in Italian as villa a piani – reproducing a whole house on one floor and to have these ‘houses’ stacked on top of each other.”

This gives occupants a greater range of views outside, while, according to Buzzi, the absence of the corridors that are often found in apartment blocks means residents can “fully perceive from the inside the true dimension of the building”.

The changeability of the brick cladding facade is a design theme repeated inside by the organisation of spaces in the apartments. “We wanted every apartment to be different, which is not always the case in an apartment building,” says Buzzi.

Varying configurations give each apartment different character too. Some reception rooms face the internal landscaped court, others the river side of the development. Even the loggias, which were conceived as external space, can be turned into an enclosed conservatory if the occupants prefer.

Use of changing window shapes adds to the seemingly random diversity; however, because 90 per cent of them are of just three standard sizes there is still a sense of unity.

The architecture of the apartment block facing Via Varenna presents a more linear structure, both in more regular floor plans and the arrangement of the brick cladding facade. This was Buzzi Studio’s design response to the one-way traffic flow of the street.

Another difference is the fully glazed ground floor on its street side, which is occupied by shops. The first floor of this building is meant for office space with the remaining floors all apartments. The two river-facing blocks at Residenza Le Stelle are entirely apartments.

Proud to play a part in creating an award-winning building

Completed in 2015, Residenza Le Stelle was one of the winners in the Multi Unit Housing – Mid Rise category of the prestigious Architizer A+Awards 2016. Entries are judged by a panel of luminaries and thought leaders from fields as diverse as fashion, publishing, product design, real estate development and technology.

“We were very pleased to win the award – a great surprise,” says Buzzi. “Sometimes you get rewarded for courage in what you’re doing. As far as I am aware I think we’ve done something that’s a first on this scale.”

He explains that using the robot-built cladding was partly a response to growing sector pressure to cut costs through quicker non-manual construction methods. However, Buzzi Studio had also taken the opportunity to explore the creative and expressive potential of imprecision and lack of visual alignment.

“I’m proud that we played a part in designing a special building. Together with the client we wanted to show that you could do better without having to spend too much.”

Judging by the plaudits from his architectural peers, they’ve succeeded in that aim. 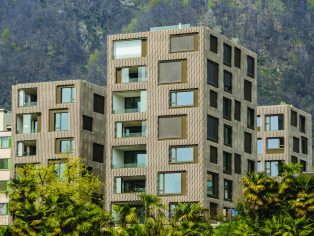 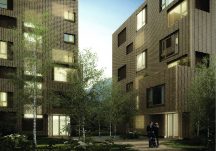 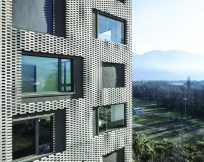