Deptford, SE8 is fast overtaking the popularity of its neighbouring Greenwich, SE10, to become the lifestyle and cultural Mecca of south east London.

The British architect is noted for his work on the Pompidou Centre in Paris, the Lloyd’s building and Millennium Dome in London, the Senedd in Cardiff and the European Court of Human Rights building in Strasbourg. He is winner of the RIBA Gold Medal, the Thomas Jefferson Medal, the RIBA Stirling Prize, the Minerva Medal and the Pritzker Prize.

£1 billion plus regeneration schemes for “the new Shoreditch”
The RISE residential development from Rogers Stirk Harbour and Partners (RSHP) is just one of many regeneration projects totalling over £1 billion in Deptford. Designed over eight floors, the development is a mixture of studios, one-and-two bedroom apartments, executive suites and penthouse suites. The building will follow a high spec, with modern communal areas, state-of-the-art kitchens, contemporary bathrooms and high tech security systems.

Located in the heart of Deptford, with a one minute walk to the overground station, the RISE development is in an excellent location for the influx of City and Canary Wharf professionals who are moving into the area.

“Cities are the physical framework of our society, the generator of civil values, the engine of our economy and the heart of our culture. In England, one of the three most densely populated countries in the world, 90% of the population live in cities, but many of our urban areas are not sustainable. Compact polycentric cities are the only sustainable form of development and should be designed to attract people. If we don’t get urban regeneration right then all our work on cities – buildings and public spaces, education, health, employment, social inclusion and economic growth – will be undermined.”

“The structure of buildings set the scale, form and rhythm of the architectural environment, within which change and improvisation can take place. Scale is given as much by the design of the details as the building as a whole. Lightness of structure, transparency and layering are dominant design factors in the work of the practice. Colour is used for a variety of reasons, including to affect the mood of the building and to humanise and change the apparent nature of materials.”

A social vision for one of the most desirable London postcodes
Rogers concludes:

“Over the last thirty years, it has become clear that the risk associated with climate change will pose serious challenges to society. Architects are constantly presented with the challenge of creating durable buildings that respond to a changing environment. Buildings, neighbourhoods and cities should be designed to minimise pollution and carbon emissions. Rogers Stirk Harbour and Partners believe that a strong social vision is the driving force which is critical for the development of a sustainable civil society.”

The off-plan RISE development is already attracting British investors with entry levels from £430,000 for a 2 bedroom apartment and yields delivering up to 4.75% yields (higher than the London average of 3.42%).

“It was excellent to discover the great Richard Rogers is one of the architects behind the RISE development. Adding this level of acclaim and expertise to Deptford’s booming regeneration just proves SE8 is one of the most desirable London postcodes right now. As with all emerging areas, though, the optimum time to get involved is right at the start of the boom. Now is that time in Deptford and the RISE development is a superb example of a sustainable investment which will deliver now and in the future.” 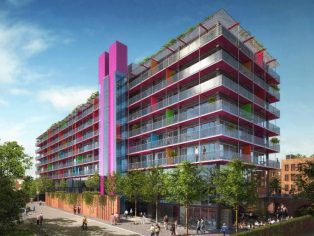