The winners of the 2017 RIBA President’s Medals were announced at a ceremony at the Royal Institute of British Architects (RIBA) in central London this evening (5 December 2017).

The RIBA Silver Medal (for the best design project produced at RIBA Part 2 or equivalent) was awarded to Daniel Hall (The Cooper Union, New York, USA), tutored by Lauren Kogod, for ‘Cycles of Toolmaking: An Optic, Tactile, Haptic, Material, Scalar and Pedagogic Study’. Sited in the ceramic town of Mashiko, Japan, the project proposes a place for learning which responds to the attitudes towards land use, extraction of clay, ceramic craft, agriculture, and water infrastructure, to replace a school damaged in the 2011 Tohoku earthquake.

This is the first time The Cooper Union entered the awards and the first time that the RIBA Silver Medal goes to a higher education institution not currently validated by the RIBA.

Commendations in the Silver Medal category were given to:

The RIBA Bronze Medal (for the best design project produced at RIBA Part 1 or equivalent) went to Kangli Zheng (University of Nottingham), tutored by Alison Davies, for ‘Castle in the Sky’. The project is a response to London’s housing crisis, proposing an alternative model: flexible room boxes plugged into the available space above London’s terraces. In these communities in the sky, the space is defined by its occupants, who can replace and customise architectural typologies such as residential homes, co-housing spaces, storage properties, and shared public gardens.

This is the first time that a student at the University of Nottingham has received an RIBA Medal.

The RIBA Dissertation Medal was awarded to Rhiain Bower (University of Westminster) for ‘Baricsio: The Slate Quarrymen’s Barracks in North West Wales’, tutored by Harry Charrington. This study of 19th century barrack dwelling for slate quarrymen in North-West Wales documents the physical structures, collating fieldwork and archival data, and the wider social sphere through newspapers, poetry and accounts of social history.

Commendations in the Dissertation Medal category were awarded to:

The Serjeant Awards for Excellence in Drawing were presented to Gabriel Beard (RIBA Part 1) for ‘Ascaya City Hall: Constructing a Virtual Civic Image’ and Thomas Parker (RIBA Part 2) for ‘An Architecture of Lumetric Causality’, both from the Bartlett School of Architecture, UCL.

“Many congratulations to this year’s RIBA President’s Medals winners. The entries for this awards programme are always impressive and this year was no exception, with more entries than ever before.

I am extremely pleased to see that the creativity and accomplished technique in the work of these budding architects is matched with a renewed ambition and focus on the important role that architecture plays in social betterment.

The passion and intelligence with which these graduates address complex architectural briefs by drawing from personal experiences and involving those for whom their buildings are designed is achieved with remarkable rigour and commitment.

I very much look forward to following their successful careers.”

The 2017 RIBA President’s Medals exhibition is on display at the RIBA in London until Saturday 10 February, and at RIBA North in Liverpool until 24th February 2018. 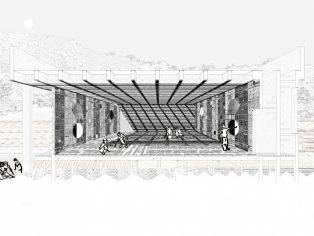