The RIBA House of the Year 2015 Winner was the Flint House which used British stone supplied by Britannicus Stone for both exterior and interior surfaces.

This beautiful award winning house in Buckinghamshire employed only the finest products in its creation and amongst them was the spectacular Moorcroft Grey marble which is supplied exclusively by Britannicus Stone as part of its British-only range of luxury stones and marbles.

Moorcroft Grey had never been cut or polished to create a marble until Britannicus did so. Quarried in Plymouth this gentle grey stone is naturally infused with gold, pink and white mineralization, and has been compared by one Italian marble expert as the British answer to a grey ‘Portoro’.

“British stones and marble are some of the finest and most beautiful in the world: they are also rare and this makes them even more special.

“It was heartening for us to be chosen for such a wonderful project as the Flint House. Moorcroft Grey marble was certainly the perfect marble to use to reflect the uniqueness of the design and architecture, plus, indeed, its Britishness.”

The Moorcroft Grey was used to connect an internal area to an external one: the marble flooring in the beautifully crafted sitting room and study, complete with bridge over an internal stream, flowing uninterrupted out into the terraced area. The marble was honed rather than polished which created a more muted and softer finish allowing for the inherent colours to play a more significant part in the pattern.

All the Moorcroft marble was laid by John Birdseye of Ammonite Projects Ltd. 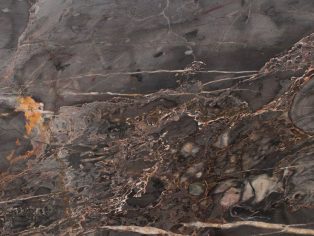